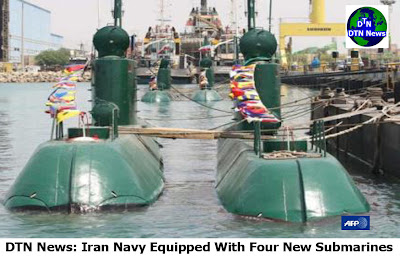 (NSI News Source Info) TEHRAN, Iran - August 9, 2010: Iran's navy on Sunday took delivery of four new mini submarines of the home-produced Ghadir class, media reports said.
The navy already owns seven submarines of this type which weigh 120 tonnes and were first launched in 2007.
Iran has described the Ghadir as stealth submarines, hardly detectable by sonar and aimed at coastal operations in shallow waters, notably in the Gulf.
The vessel is based on North Korean models of the Yono class and can shoot torpedoes, but their main tasks appear to be moving commandos, laying mines and reconnaissance missions, experts say.
Iran's inventory of submarines patrolling Gulf waters also includes up to three Russian-built Kilo class diesel submarines bought in 1990s and a Nahang, an Iranian-built light sub weighing 500 tonnes that was first launched in 2006.
In 2008 Iran started building a new submarine named Qaem which is due to be launched within days, Iran's army chief Ataollah Salehi said last week, describing it as "semi-heavy" and capable of operating in the high seas such as the Indian Ocean or the Gulf of Aden.
Little information has been released about this home-produced vessel, which is said to be capable of firing missiles and torpedoes.