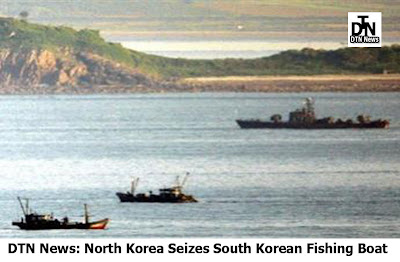 border, the South Korean Coast Guard said Sunday, straining already high tensions between the two Koreas.
The 41-ton squidding boat was believed to have been detained after entering the North’s exclusive economic zone, where foreign fishing boats are banned, the coast guard said in a statement.
Four South Koreans and three Chinese crew members were on board.
South Korea’s national news agency, Yonhap, quoting an unnamed coast guard official, said that the ship was being towed to Songjin, a port on the eastern coast of North Korea, for interrogation of the crew.
“Our government hopes for the safe return of our ship and crew according to international laws,” the coast guard’s statement said.
Inter-Korean relations have plunged to their lowest in years since a South Korean ship was sunk in March, killing 46 sailors. South Korea attributed the sinking to a North Korean torpedo attack, which the North denies, and is conducting a major naval exercise off of the west coast of the divided peninsula.
North Korea has vowed retaliation against the naval drills. In the years immediately following the 1950-53 Korean War, North Korea was accused of prowling into South Korean waters and kidnapping South Korean fishing boats. Hundreds of South Korean fishermen from those ships never returned home.
Such incidents have become rarer in recent decades. But fishing boats from either side have occasionally drifted into the other’s waters, often after engine trouble. How fast they were released often depended on the tenor of bilateral relations at the time.
The South Korean squid ship left Pohang, a port on the east coast of South Korea, on Aug. 1 and was scheduled to return to port on Sept. 10. It made its last daily radio report to the South Korean Coast Guard on Saturday evening.
Posted by DEFENSE NEWS at 6:23:00 AM