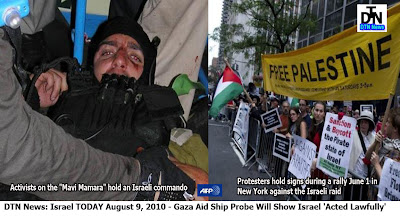 "I am convinced that at the end of your investigation, it will become clear that the state of Israel and the IDF (Israeli Defence Forces) acted in accordance with international law," Netanyahu told members of the Tirkel Commission as he began testifying about the raid.
"I am the first one to appear before this honorable commission. Many others will appear after me, and I believe that all the details will become clear and you will get to the root of the truth," he said.
The Israeli leader looked at ease as he entered the room shortly after 9:00 am (0600 GMT), smiling at the hoards of journalists and members of the public waiting to hear his sworn testimony.
After he took his seat, facing the panel bench with his back to the audience, the committee members made their way into the auditorium.
Opening the session, which was expected to last into the afternoon, committee chairman Yaakov Tirkel said some of Netanyahu's testimony would be given verbally and some would be delivered in written form.
"As much as possible, the committee will try to let the prime minister give his testimony verbally or in written form," he said.
Some of the session was expected to take place behind closed doors.
Netanyahu is the first of three top officials to give sworn testimony about the May 31 incident in which naval commandos stormed six aid ships trying to run the blockade on Gaza, killing nine activists and wounding scores of others.
The bloody raid caused a diplomatic crisis between Israel and Turkey and sparked global calls for an inquiry -- prompting Netanyahu's government to set up the Tirkel Commission to look into the legality of the operation.
Israel says its commandos resorted to force only after they were attacked when they rappelled onto the deck of the Turkish passenger ferry Mavi Marmara. But the activists on board say troops opened fire as soon as they landed.
Netanyahu was not likely to face any awkward questions on Monday as he testified before the five panel members, two foreign observers and hundreds of members of the press and public.
When the committee was created in June, Netanyahu's office said its mandate was to examine the international legality of Israel's naval blockade and of actions taken to enforce it, as well as the actions of those who organised and took part in the flotilla.
Panel members are not authorised probe the decision-making process which led up to the operation, nor do they have the authority to question troops involved in storming the boats.
Defence Minister Ehud Barak will take the stand on Tuesday, followed by Chief of Staff Gabi Ashkenazi on Wednesday, with both likely to be quizzed over the operational aspects of boarding the ships.
Ashkenazi will be the only serving member of the military to testify before the committee.
The five-man panel, headed by Tirkel, a retired judge, began investigating the raid at the end of June, and its deliberations are being monitored by two international observers.
The creation of the panel, its members and its mandate were all backed by Israel's cabinet. Its findings will be presented to the government, which has already blamed the bloodshed on the activists.
The Israeli military has already completed its own inquiry into the pre-dawn raid and concluded that although mistakes were made at a "relatively senior" level, the use of live fire was justified.
Israel has repeatedly said it has the right to stop vessels from reaching the Gaza Strip since they could be carrying weapons for the Islamist Hamas rulers of the enclave. Hamas is sworn to the destruction of the Jewish state.
Last week UN Secretary General Ban Ki-moon named his own panel to look into the botched raid, which is set to begin work on Tuesday and includes representatives from Israel and Turkey.
The UN Human Rights Council is also carrying out an inquiry, as is Turkey which is reportedly looking to make a criminal case against Netanyahu, Barak and Ashkenazi, charging them with piracy and murder.