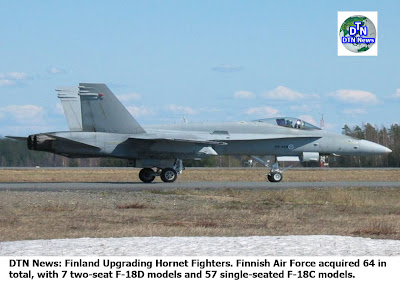 to spend more than a billion euros in the upgrading of its fleet of F-18 Hornet jet fighters.
The US-built planes are at about the halfway point of their effective lifespans. The upgrade is set to extend their usefulness so that new fighters would not be needed before 2025. Nevertheless, the Finnish Air Forces is looking at other possible jet fighters on the market.
The most recent achievement of advanced military aviation is the American F-35 fighter, which Norway’s air force is planning to acquire.
Finland is also looking at the F-35, although the super-modern jet is also super expensive.
Precision Weapons for Hornet
The Air Force says that it is now concentrating on the upgrading of the Hornet.
The planes, which are primarily attended to give the Finns the capability to repulse an attack, are being modified to function as assault planes, capable of hitting land targets from a long distance.
Army Also Upgrading Equipment
The Finnish Army is also planning to upgrade much of its materiel. East German equipment, including Leopard tanks which were acquired in the 1990s, is becoming obsolete.
A key requirement in new acquisitions is compatibility with NATO systems, even though Finland has no immediate plans to join the alliance.
Finnish Air Force - F-18 Hornet
The F-18 Hornet is the Finnish Air Force variant of the Boeing IDS F/A-18 Hornet multi-role attack and fighter aircraft. The aircraft is almost identical to a late F/A-18C/D used by the US Navy, as well as the Hornets used by the Swiss Air Force, although no air-to-ground equipment or weapons were purchased with the aircraft. The decision to rename the aircraft to F-18 was mainly a political decision to underline the air defense role of the fighters.
The decision to purchase the aircraft (64 in total, with 7 two-seat F-18D models and 57 single-seated F-18C models) was made in 1992, soon after the 1991 collapse of the Soviet Union. The original plan was to buy about 40 western fighters and about 20 Soviet fighters due to political reasons, but after the collapse of the Soviet Union this was no longer necessary. The plan changed to 60 single-seat + 7 dual seat fighters of the same type, and the F-18 won the contest. To keep the budget the number of fighters to be purchased was decreased by three, to 57+7. The 57 single-seat aircraft were produced in Finland by Patria.
*This article is being posted from Toronto, Canada By DTN News ~ Defense-Technology News, contact: dtnnews@ymail.com
YLE Finnish Broadcasting Corp. ~ Related News

A poll published by the newspaper Helsingin Sanomat indicates that Speaker of Parliament Sauli Niinistö is the most popular potential candidate for the Finnish presidency.

The Finnish Defence Forces are preparing to spend more than a billion euros in the upgrading of its fleet of F-18 Hornet jet fighters.

Finavia Says Wingo May Not Start Flights to Pori, Seinäjoki

Finland's aviation authority Finavia says that travel operator Wingo will not be able to begin flying from Helsinki to Pori and Seinäjoki as advertised. Wingo says it will be flying the routes on Wednesday.

Two people injured at last weekend's Sonisphere Music Festival in Pori are no longer in critical condition. On Sunday, a sudden and unusually powerful storm surprised festival fans and knocked part of a stage into the crowd.

Air quality in the south and east of Finland has deteriorated significantly owing to smoke that has been spreading into the area from forest fires in Russia. Health experts are advising against strenuous exercise out of doors while there is smoke in the air.

The “World Sauna Championships” in the Finnish city of Heinola came to a tragic end on Saturday evening when one of the finalists, a Russian man, died in the end stages of the competition. He was competing against a Finnish man who was hospitalised.

About 8,000 Households without Electricity

About 8,000 households around Finland were still without electricity Sunday evening in the aftermath of severe weatherin recent days and weeks.

Bibi Aisha, a 19-year-old Afghan woman whose disfigured face was on a recent cover of the US news magazine Time lived for a while in a women’s refuge maintained by Finnish development cooperation funds. A YLE news journalist interviewed Aisha in June. The possibility of her having reconstructive surgery in Finland was discussed, but she is now in the United States for treatment.

Forest fires raging in Russia are negatively affecting air quality in Finland. Airborne smoke particles can cause symptoms for the most sensitive especially in the east of Finland.

The travel service company Wingo is holding talks with its financiers on Saturday on the possibility of opening service to Seinäjoki and Pori. On Monday, Finncomm Airlines announced that it would cancel flights to the two cities, a move that would deprive them of scheduled passenger air service.

Trains in the east of Finland are on schedule again after trees felled by Wednesday’s stormy were cleared away from the tracks. Buses were used to substitute trains between Imatra and Joensuu until Friday evening.

The Finnish defence manufacturer Patria has sold its share in the Vihtavuori gunpowder factory to the French company Eurenco. Before the sale, Eurenco owned about 60 percent of Vihtavuori, and Patria and the Swedish Saab had shares of about 20 percent each
Posted by DEFENSE NEWS at 8:48:00 PM