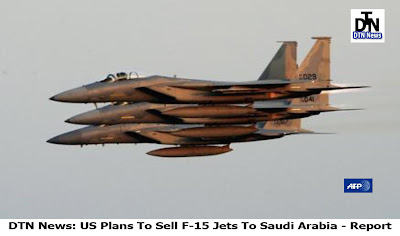 without long-range weapons systems objected to by Israel, The Wall Street Journal reported.
Citing unnamed diplomats and officials, the newspaper said the proposed 30-billion-dollar, 10-year package has been under negotiation for months and has generated a lot of tensions.
Israeli officials have been concerned that the administration of President Barack Obama risked undermining Israel's regional military advantage, the report said.
But US officials said they had provided "clarifications" about the deal to help address Israel's concern, the paper said.
Two officials close to the negotiations said Israel still had some reservations, but was not expected to challenge the sale by lobbying Congress, The Journal noted.
Under the proposed sale, the 84 F-15s for Saudi Arabia will have onboard targeting systems similar to those offered to other foreign governments, the paper said.
But to assuage Israel's concerns, the Obama administration has decided not to offer Saudi Arabia so-called standoff systems, which are advanced long-range weapons that can be attached to F-15s for use in offensive operations against land- and sea-based targets, The Journal noted.
Related News: 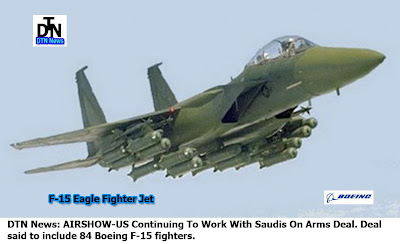 officials familiar with the plan said on Thursday.
The arms sale package, still subject to congressional approval, would include dozens of UH-60 Black Hawk helicopters built by Sikorsky Aircraft, a unit of United Technologies Corp (UTX.N), missile defense equipment and ships.
"Those are all work in progress," Navy Vice Admiral Jeffrey Wieringa, director of the Pentagon's Defense Security Cooperation Agency, told Reuters in an interview at the Farnborough Airshow. "We'll just continue to move forward."
Wieringa, who oversees foreign arms sales, said he could not give any timetable for completion of the deal, given recent appointments of new air force and navy chiefs in Saudi Arabia.
"They may have different defense visions and I need to be respectful of the new leaders," said Wieringa, who is due to retire at the end of the month. "It's important for us to work together."
Boeing declined comment. No comment was immediately available from United Technologies. The arms sale would also likely include new coastal warships.
The U.S. Navy is expected to pick the winning designs for the new warships in mid-August. Lockheed Martin Corp (LMT.N) and the U.S. unit of Australia's Austal (ASB.AX) are competing for the deal, valued at well over $5 billion.
Defense industry executives at the air show outside London have said they saw strong interest in U.S. weapons from cash-rich Gulf nations this week.
They say the Obama administration has taken strong steps to encourage arms sales to U.S. allies given its interest in promoting security cooperation.
U.S. officials say Saudi Arabia and other Gulf states are worried about Iran's alleged pursuit of nuclear weapons.
In the interview with Reuters, conducted on Monday, Wieringa said the phrase "security cooperation" was mentioned 22 times in the U.S. quadrennial defense review completed earlier this year, versus five times in the previous defense review.
He said he was receiving strong support from senior Pentagon leaders for arms sales around the world, and in this case, from the military services as well.
Once the United States and Saudi Arabia reach agreement on a deal, the Pentagon will conduct discussions with congressional aides to ensure the support of U.S. lawmakers and address any concerns.
Then, Wieringa's agency would send a formal notification to Congress, giving lawmakers 30 days to object to the deal. Generally, notifications are not sent unless lawmakers have already generally agreed to the sale.
Saudi Arabia was the biggest buyer of U.S. weapons during a four-year span of 2005 through 2008, with $11.2 billion in deals, according to the U.S. Congressional Research Service.
(Reporting by Andrea Shalal-ESa with additional reporting by Adam Entous; Editing by Tim Dobbyn)
Posted by DEFENSE NEWS at 6:28:00 AM