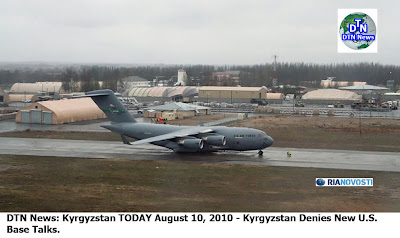 with the United States on the establishment of a new military base in the republic, government spokesman Farid Niyazov said on Monday.
The Washington Post reported on Saturday that the United States is planning to move ahead with construction of a $10 million military training base in Osh, called "the Osh Polygon."
It said discussions continued "under the new Kyrgyz president, Roza Otunbayeva, with whose government Washington is trying to broaden relationships."
"The interim government is conducting no negotiations with the United States on this subject. President Roza Otunbayeva has repeatedly stated that this decision will be the prerogative of a popularly elected parliament," Niyazov said.
Parliamentary elections in Kyrgyzstan have been set for this coming fall.
Defense Ministry spokesperson Aizada Igibayev said reports "about the establishment of a U.S. military base in the republic are at odds with the facts."
The Washington Post said Osh Polygon will consist of "a secure garrison compound with officers' quarters and barracks for enlisted personnel, plus range facilities, firing pistols, rifles, crew-served weapons and explosive ordnance."
It said so far this year, the United States has contributed $45 million to the Kyrgyz government and paid $13 million in fees for use of the Manas Base, "a key facility aiding the war in Afghanistan."
Washington recently pledged an additional $8.6 million in humanitarian assistance to the Bishkek government as its contribution at a World Bank donors conference.
Related News
*High-ranking U.S. diplomat to discuss post-crisis situation in Kyrgyzstan
*Medvedev says U.S. base in Kyrgyzstan should not be permanent
*U.S. commits over $32 mln to cope with Kyrgyz crisis
*U.S. keeps close eye on situation in violence-hit Kyrgyzstan
Multimedia
*Kyrgyzstan to close key U.S. air base
*Ethnic clashes in Kyrgyzstan
Posted by DEFENSE NEWS at 8:47:00 PM