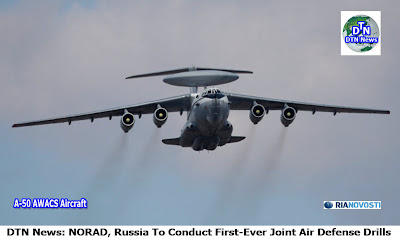 Russian Air Force will hold their first-ever joint air defense exercise on August 8-11, NORAD said.
The exercise, dubbed VIGILANT EAGLE, involves Russian, Canadian and U.S. Air Force personnel operating from command centers at the Elmendorf airbase in Alaska, and in Khabarovsk, Russia.
"Airborne warning and control aircraft [AWACS E-3B and A-50] from Russia and the United States will be involved along with fighter-interceptor aircraft and refueling aircraft from both countries," NORAD said in a statement on Tuesday.
The exercise scenario, put together by NORAD and U.S. Northern Command, will create a situation that requires both the Russian Air Force and NORAD to launch or divert fighter aircraft to investigate and follow a U.S. flagged commercial air carrier on an international flight that has been taken over by terrorists.
The exercise will be carried out under a cooperative military agreement between Russia and the United States, which tasks NORAD, the bi-national U.S. and Canadian command, and the Russian Air Force to conduct a live-fly exercise for up to five days.
Related News
*India to purchase two more AWACS planes from Russia
*Russia modernizes fleet of A-50M AWACS planes
Posted by DEFENSE NEWS at 8:46:00 PM