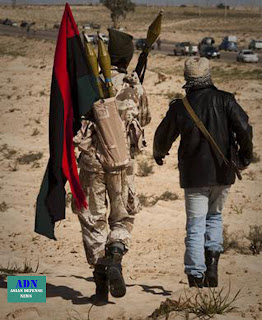 China Tuesday warned of an impending "humanitarian disaster" in Libya and called for an immediate ceasefire in the oil-rich North African state where the US and European powers have launched a four-day air assault.

"The original intent of the UN Security Council resolution was to protect the safety of all Libyan people. We oppose the indiscriminate use of armed force there, causing even more civilian casualties and more humanitarian disasters now," the spokeswoman said.

"The future of Libya should be decided by the Libyan people themselves," Jiang said.

Meanwhile, Heavy anti-aircraft fire and loud explosions sounded in Tripoli after nightfall Tuesday, and US military warned Tuesday it was "considering all options" in response to dire conditions in Libya.

U.S. President Barack Obama said Tuesday that Washington is "days away "from turning over command of the air strikes on Libya to its European allies. However, how that will be accomplished remains unclear.

Obama spoke Tuesday with British Prime Minister David Cameron and French President Nicolas Sarkozy in hopes of quickly resolving the squabble over the transition of the war command power.

Libyan state TV broadcast what it said was live coverage of Gadhafi's 5-minute statement. Standing on a balcony, he denounced the coalition bombing attacks on his forces.

"My great Libyan people, you have to live now, this time of glory, this is a time of glory that we are living," he said.

Obama said he has "absolutely no doubt" that a non-U.S. command entity could run the military operation, codenamed "Odyssey Dawn", although the most obvious candidate — the NATO alliance — has yet to sort out a political agreement.

Obama said NATO was meeting to "work out some of the mechanisms."