Canadian jet fighters have flown their first mission in the skies over Libya as part of a coalition effort to rein in Moammar Gadhafi’s crackdown on pro-democracy rebels. 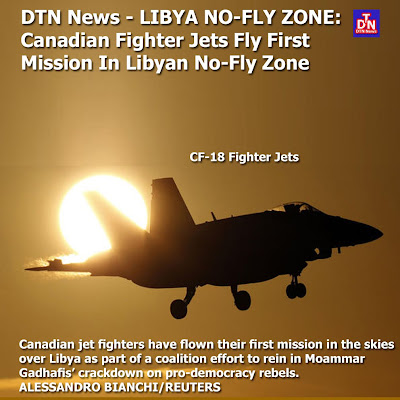 No shots were fired but Canadian fighter pilots are prepared to engage any targets – on the ground or in the air, MacKay told reporters.

“They will be ready for any inevitabilities. There’s no way . . . we can predict what they may encounter,” MacKay told a briefing at national defence headquarters.

He noted the Canadian jets are part of an international effort to enforce a no-fly zone and cripple Libya’s air force, which has been targeting rebels as they advance across the country.

Over the weekend, Gadhafi’s forces were the target of airstrikes and dozens of cruise missiles by the international air force.

“These high-level strategic strikes are to dispose airfields and the use of Libyan military assets that Gadhafi’s regime is using to target civilians,” MacKay said.

“Simply put, we want to disable their air force. We want to ensure that civilians are no longer the subject or the target of Gadhafi’s regime brutality,” he said.

MacKay said it was too soon to say whether Canadian jets, based in Trapani, Italy, would be flying bombing missions against Libyan targets.

“We are hopeful that the strategic targeting that took place within the last 24 hours has had its effect in terms of the capabilities of the regime’s forces,” MacKay said.

Monday’s flight marks the first time in more than a decade Canadian air fighters have been engaged in an active military mission abroad.

While the fighters are routinely used to safeguard Canadian sovereignty, they last flew combat sorties in 1999, when they flew bombing missions during the NATO bombardment of Yugoslavia.

The morning mission over Libya was to achieve air superiority, protecting not only other coalition aircraft but also coalition ships engaged in enforcing the arms embargo.

“Our crews are highly trained in the use of precision guided munitions,” said Maj.-Gen. Tom Lawson, assistant chief of the air staff.

“However, having said that, the risk in employing air-to-ground munitions in such a fluid environment is real,” Lawson said.

He said that Canadian pilots are working with “very strict” rules of engagement and are aware of the need to positively identify potential targets.

“To be clear, we will aim for no collateral damage,” Lawson said.

The Conservative government last week ordered the six jets to join an international effort imposing a UN-mandated no-fly zone over the country. The move is meant to halt Gadhafi’s strikes against pro-democracy rebels who are rising up against his four-decade old regime.

Prime Minister Stephen Harper called the opposition leaders over the weekend to discuss Canada’s escalating involvement. The Canadian frigate HMCS Charlottetown was deployed earlier and is now in the Mediterranean Sea.

The House of Commons was scheduled to debate the crisis and Canada’s role later Monday.

MacKay said another six fighter planes are on standby to deploy if needed, though he didn’t think that would be happening soon.

“There is no set plan at this point to deploy more aircraft into theatre. . . . What we’ll do is essentially wait and watch,” MacKay said.