U.S. President Barack Obama on Tuesday won British and French support for a NATO role in the air campaign against Libya's Muammar Gaddafi as the western allies thrashed out operational details aimed at transferring U.S. control of the mission. 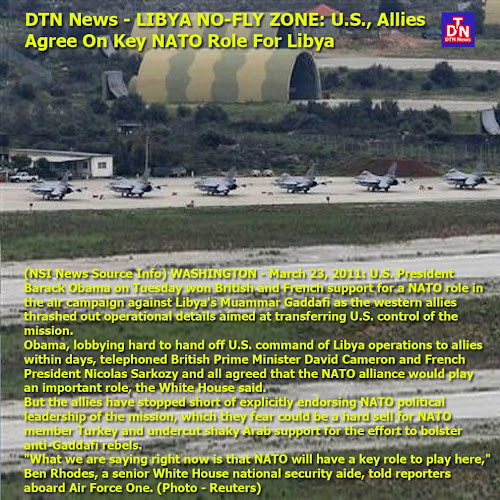 Obama, lobbying hard to hand off U.S. command of Libya operations to allies within days, telephoned British Prime Minister David Cameron and French President Nicolas Sarkozy and all agreed that the NATO alliance would play an important role, the White House said.

But the allies have stopped short of explicitly endorsing NATO political leadership of the mission, which they fear could be a hard sell for NATO member Turkey and undercut shaky Arab support for the effort to bolster anti-Gaddafi rebels.

"What we are saying right now is that NATO will have a key role to play here," Ben Rhodes, a senior White House national security aide, told reporters aboard Air Force One.

Obama's personal diplomacy underscored that NATO's command-and-control capability will make it central to the unfolding campaign against Gaddafi's forces, which began with air strikes on Saturday aimed at protecting civilians.

Seeking to shore up international backing for the operation, Obama has called leaders in Europe and the Middle East and has stressed that NATO must take over a coordinating role as he seeks to avoid getting U.S. forces bogged down in another Muslim country after Iraq and Afghanistan.

In Brussels, NATO diplomats agreed on Tuesday to enforce an arms embargo on Libya but again saw heated debate over whether the alliance should run the military campaign over Libya.

Admiral Samuel Locklear, head of U.S. forces enforcing the no-fly zone over Libya, said he was working closely with British and French officials and that military forces from 13 nations were moving to take part in the mission.

'TRANSFER WITHIN A FEW DAYS'

"I don't want to get out in front of the diplomacy that's been going on but I still think that a transfer within a few days is likely," Gates told reporters on a visit to Russia. "This command-and-control business is complicated. We haven't done something like this. We were kind of on-the-fly before."

One U.S. official said Washington believed NATO would effectively have to take operational, if not political, control due to its superior command structure.

That prospect, which has been strongly resisted by both France and Turkey, threatens to alienate Arab nations over perceptions of Western aggression against a Muslim country.

"They are still looking at NATO," one U.S. official said, speaking on condition of anonymity. "It could be a subtle NATO lead but still a NATO lead."

Opinion polls show mixed U.S. public support for the Libya campaign as some members of Congress step up criticism of Obama. Some lawmakers say he waited too long to get involved. Others say Obama has failed to define the mission in Libya and warn about sending stretched U.S. forces into a third war.

Obama, who is traveling in Latin America, telephoned the Turkish and Qatari leaders on Monday evening before his discussions with the French and the British.

Turkey has said it is unable to agree to NATO taking over the Libya no-fly zone if the scope of the operation goes beyond what the United Nations sanctioned.

Obama and Turkish Prime Minister Tayyip Erdogan agreed that the Libya mission should be an international effort that includes Arab states and is "enabled by NATO's unique multinational command and control capabilities to ensure maximum effectiveness," the White House said in a statement.

Western diplomats said Obama's call to Erdogan appeared to have won backing for at least some NATO role in enforcing the U.N. resolution, which could help speed the transition.

"They are not that far from the U.S. on a role for NATO. There is room for negotiation there," one Washington-based diplomat said. "We all agree we do not want to go beyond the U.N. resolution, and we are not."

The U.N. Security Council resolution authorizing the action on Libya passed 10-0 but Russia and China, among five nations that abstained, have both voiced doubts about the campaign, echoed by other emerging powers such as India and Brazil. Russian President Dmitry Medvedev told Gates that Moscow was concerned over possible civilian casualties in what he called the "indiscriminate" use of force in Libya.