The Italy-based maker of Turkey's first planned military satellite said the construction of the Gokturk satellite is on track, with a scheduled launch in 2013, despite objections raised by Israel against the device's operational capabilities. 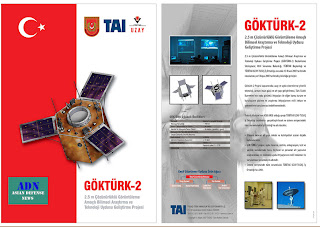 Relations between former allies Israel and Turkey have been at their nadir since last May, when Israeli commandos raided a Turkish-led aid flotilla bound for the Gaza Strip, killing nine Turks onboard one of the ships. The Gokturk satellite has become the latest dispute between the two new adversaries.

"Gokturk is on track for a launch window in line with contractual requirements," according to a March 21 statement from Telespazio.Telespazio, a joint venture between Italy's defense giant Finmeccanica and France's Thales, a couple of years ago signed a deal worth nearly 250 million euros (about $345 million) for the Turkish military satellite. Finmeccanica has a 67 percent stake in Telespazio.

Asked if the satellite would meet the contractual specifications, the official said that "the satellite is being designed to meet the customer's operational requirements."

That includes a high-resolution optical sensor.

"The satellite program is on track at this point. It is at an earlier stage of technical design," said one senior Turkish procurement official.

Israel does not want to be photographed at high resolutions, and has raised objections to Turkey's military satellite program.

"Some people are disturbed by this. They say, 'Turkey will watch us from space in the future,'" Erdogan said March 11. "You have been watching us for many years, decades."

A senior Finmeccanica official earlier said his company also would seek to grab a Turkish contract for the next military satellite.

"The next satellite program involves a payload comprising a synthetic aperture radar, and the Finmeccanica Group companies will be even more competitive than in the past," said Paolo Pozzessere, Finmeccanica's commercial director.

Finmeccanica has been increasingly active in Turkey in recent years.