Source: DTN News - - This article compiled by Roger Smith from reliable sources Asian Defense News
(NSI News Source Info) TORONTO, Canada - March 23, 2011:
By DAVE MAJUMDAR : One aircraft conspicuous by its absence over the skies of Libya is the U.S. Air Force's vaunted F-22 Raptor air dominance fighter. The Lockheed Martin-built jet was likely benched due to its inability to communicate with other coalition aircraft and its limited ability to hit ground targets, analysts said. 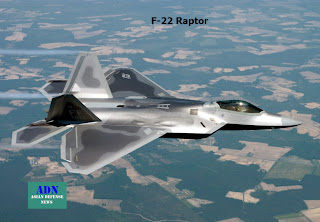 "The designers of the F-22 had a dilemma, which is whether to have the connectivity that would allow versatility or to have the radio silence that would facilitate stealthiness. What they opted for was a limited set of tactical data links," said Loren Thompson, an analyst and chief operating office at the Lexington Institute, Arlington Va.

Radio emissions from various data links could potentially give away the aircraft's position, Thompson said.The F-22 can only connect with other F-22s via an intraflight data link, and can only receive, but not transmit, over the standard Link-16 data link found on most allied aircraft.

As such, while the Raptor is the stealthiest operational aircraft in the world, it lacks much of the connectivity found on other warplanes, he said.

The aircraft also lacks a significant air-to-surface punch. Currently, the F-22 can only use two 1,000-pound Joint Direct Attack Munitions, which are GPS-guided bombs, against fixed targets. It does not yet have the ability to carry the 250-pound Small Diameter Bomb (SDB) or to create synthetic aperture radar maps, which are black and white photo-quality images of the Earth's surface, needed to select its own ground targets. By contrast, an F-15E Strike Eagle can carry 24,000 pounds of ordnance.

Those capabilities will be available once the Increment 3.1 hardware and software upgrade is fielded into the operational Raptor fleet later this year. However, even with Increment 3.1 installed, the F-22 will only be able to designate two targets in total for the eight SDBs it would be able to carry. The operational test force has been putting Increment 3.1 through its paces at Nellis AFB, Nev., since November.

However, the addition of Increment 3.1 will not resolve the Raptor's basic inability to connect with other aircraft, nor has the Air Force articulated a clear plan for the F-22 to do so. A future upgrade called Increment 3.2 was to have included the Multifunction Advanced Data-link (MADL) found on the F-35 Joint Strike Fighter, however, the Air Force deleted funding for that data link last year.

The MADL is also planned for integration into the B-2, which would have enabled the entire Air Force stealth aircraft fleet to be connected during operations inside hostile airspace.

Further, it is only with the addition of Increment 3.2 that the Raptor would be able to independently retarget eight SDBs at eight separate targets.

Under the Air Force's global strike task force doctrine, the Raptor would normally escort B-2 Spirit stealth bombers in "kicking down the door" of an enemy's air defenses. However, U.S. Africa Command, which is running Operation Odyssey Dawn, confirmed the F-22 has not flown over Libya.

"I see no indication that F-22s were used as an escort for the B-2 nor do I see anything that indicates the Raptor will be used in future missions over Libya," said Air Force Maj. Eric Hilliard, a spokesman for Africa Command.

On March 20, three B-2s flew bombing runs out of their base at Whiteman Air Force Base (AFB), Mo., against targets in Libya.

Analysts concurred that part of the reason for the absence of the Raptor is that it was not needed to defeat Libya's relatively pedestrian air defenses. The Libyans have a largely obsolete fleet of aircraft and only older model Soviet surface-to-air weaponry.

"Frankly, they might not be needed. Libya's defenses were not that robust to begin with and were rolled back quite handily," said Mark Gunzinger, an analyst with the Center for Strategic and Budgetary Analysis, Washington.

Gunzinger said that the B-2s probably flew at night, which would eliminate any chance of the billion-dollar warplane being spotted visually by the enemy. The large subsonic aircraft could be potentially vulnerable if it was seen, which is why it would be escorted by high performance stealth fighters like the F-22 if it was flying against a more challenging foe such as Iran or North Korea, Thompson said.