Source: DTN News - - This article compiled by Roger Smith from reliable sources Asian Defense News
(NSI News Source Info) TOKYO, Japan - March 23, 2011:
(By Leika Kihara and Kaori Kaneko | Reuters – 33 minutes ago) - The Japanese government on Wednesday estimated the direct damage from a deadly earthquake and tsunami that struck the country's northeast this month at as much as $310 billion, making it the world's costliest natural disaster. 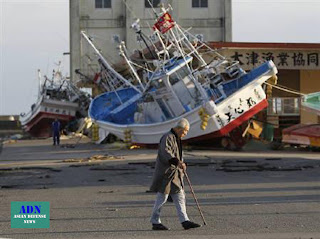 The first official damage estimates will serve to map out disaster relief plans and emergency budgets to fund recovery costs.

Tokyo said the estimate covered damage to roads, homes, factories and other infrastructure, and eclipses the losses incurred by other natural disasters such as the 1995 Kobe quake and Hurricane Katrina in 2005.

The figure could go even higher, as the estimate does not include losses in economic activity from planned power outages or the broader impact of a crisis at a stricken nuclear power plant in Fukushima, which economists say pose the biggest risks to the economy.

"The impact from the planned power outages is likely to be significant," Fumihira Nishizaki, director of macroeconomic analysis at the Cabinet Office told reporters.

The upper end of the 16-25 trillion yen ($197-308 billion) estimate range would amount to about 6 percent of Japan's gross domestic product.

"This quake will cause the condition of Japan's economy and output to be severe," Bank of Japan Governor Masaaki Shirakawa told a parliamentary committee.

"We need to be mindful that the quake's negative impact on the economy, at least on the supply side, may be bigger than the Kobe quake 16 years ago, and be prolonged," he added.

In its initial response to the disaster, the central bank doubled the funds earmarked for purchases of a range of assets and started pumping record amounts of cash into the money market to prevent it from seizing up.

It later followed up by joining forces with other G7 central banks in a rare coordinated move to keep a rallying yen from inflicting further damage to the economy.

With interest rates near zero and banks' cash balances at records above levels seen in 2001-2006 when the BOJ sought to flood the banking system with cash to spur lending, there is not much more the central bank can do to help the economy.

"The ball is in the government's court," said Yasunari Ueno, chief market economist at Mizuho Securities in Tokyo. "Currency intervention was one thing. The next thing it needs to do is to come up with a credible fiscal spending plan."

Officials from the ruling coalition have said that at least two and perhaps more emergency budgets would be needed to pay for the reconstruction, with the first focused on immediate disaster relief, possible in April or May.

The government has yet to decide how it will finance those budgets, which some analysts say may exceed $100 billion and most certainly will require new borrowing.

Yet with its debt already twice the size of its $5 trillion economy -- the highest among industrialised nations -- Japan should not rush to borrow to pay for the reconstruction, Finance Minister Yoshihiko Noda said.

"With our public finances in a severe situation, we'll closely watch how it (the quake) could affect tax revenues," Noda was quoted by a government official as telling a cabinet meeting. "As for financial resources for reconstruction, we need to ensure market confidence and should not rely too readily on debt issuance," he said.

Economists and rating agencies say Tokyo should have little trouble raising extra funds, but some analysts say there is a risk that additional supply of government bonds could push up Tokyo's borrowing costs.

While economists expect Japan's biggest reconstruction push since the post-World War Two period to give the hard-hit economy a badly needed lift in the second half of the year, they warn that power shortages are the greatest risk to such a scenario.

The 9.0 magnitude quake that struck on March 11 unleashed a deadly tsunami that wiped out whole communities, leaving nearly 23,000 people dead or missing and 350,000 homeless, and crippling the biggest power utility in Japan and Asia.

Tokyo Electric Power Co, which serves Tokyo and the surrounding area that accounts for 40 percent of Japan's economic output, lost about 20 percent of its operating thermal and nuclear power generation and is unlikely to get enough back online to meet peak summer demand.

The utility is unable to get much surplus power from operators in the undamaged western part of the country because they operate with a different power frequency.

Toyota Motor Co, the world's top automaker, could be losing about $74 million of profit for every day its 12 assembly plants remain shut, Goldman Sachs estimated, and it is just one of dozens, if not hundreds, of Japanese manufacturers facing disruptions.

Many analysts see a ripple effect from the disaster with disruption to production, both inside Japan and abroad, and the impact of fears of radiation and food contamination hurting business and consumer sentiment worldwide. ($1 = 81.065 Japanese Yen)