Source: DTN News - - This article compiled by Roger Smith from reliable sources including Ria Novosti
(NSI News Source Info) TORONTO, Canada - August 13, 2010: Ahead of the scheduled Russian-Indian naval exercises, in which the heavy nuclear missile cruiser Pyotr Veliky will take part, Tatiana Shaumyan, director of the Center for Indian Studies at the Institute of Asian Studies, discusses the state of Russian-Indian relations and the prospects for defence cooperation between the two countries. Interview by Igor 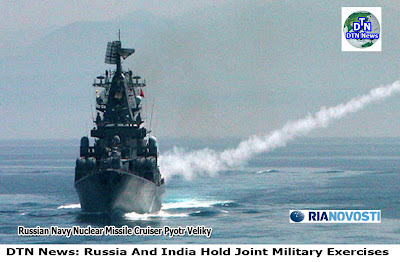 Chekunov.
Russia and India enjoy longstanding and close ties in many areas. How would you describe Russian-Indian relations on defence at present?
Defence cooperation is one of the most important and longstanding aspects of our relationship with India. This cooperation began in the 1960s, soon after the Indo-Chinese border conflict. Our defence cooperation has been ongoing since then, despite some interruptions in the 1990s due to factors beyond our control, notably the collapse of the Soviet Union, when many Soviet-era structures were dismantled and Russian ones were only just emerging. It was a difficult period, because Russia supplied about 70% of India’s military hardware. But gradually defence cooperation was restored and today it is considerable. The structure of the relationship has transformed from the sale of ready-made weapons from Russia to India to the joint development of new technologies and the production of missiles and aircraft. This is a big step forward from our past relationship.
Currently, Russia and India are implementing several joint military programs. The most important are the production and upgrading of the BrahMos missile and the construction of fifth-generation supersonic fighters, among other things. It would be desirable to see the level of cooperation that we have achieved in the field of defence maintained in other areas, especially in trade and science and technology. The upcoming exercises will add considerably to Russian-Indian military cooperation. The situation around the world changes from year to year, and therefore the goals and objectives of these exercises also change. What do you consider their purpose to be at this moment?
The threat of armed conflict, as such, always exists theoretically, but it seems to me that today one of the greatest security challenges for Russia and India is the fight against international terrorism, as both countries, unfortunately, have been the victims of international terrorist acts. The threat of terrorist attacks in Russia has spread beyond the regions that are generally considered targets, and in India today there are attacks not only in Kashmir but in other regions and major cities as well – Mumbai and Delhi. The fight against terrorism is one area where our joint exercises and projects can have a very significant impact.
Joint naval exercises have grown in importance in recent years because of the threat of piracy, which has become a danger to the ships of practically ever country involved in international commercial shipping. Russia and India have repeatedly suffered heavy losses due to international piracy on shipping lanes. If we work together to develop methods to counter this threat together, both countries will benefit.
India-US relations are rapidly developing in parallel with the close relations between India and Russia. Although the Obama administration has apparently shifted US foreign policy priorities from India to China, the United States and India continue to cooperate on military and nuclear issues.
I believe that, one way or another, these two Asian powers will always be a priority for the United States. The United States wants to develop relations with China while keeping India as an ally and vice-versa. Balancing relations with various countries is a key aspect of international relations. The United States sees India as a major and influential actor in global politics. Moreover, I think that the United States has actually recognised India as a nuclear power. By signing a nuclear deal with India in 2005 the Americans clearly recognised India’s nuclear arsenal. When it comes to the South Asian region, the United States has for a long time relied on its longtime military and political ally Pakistan. The United States has a special relationship with Pakistan today in light of the situation in Afghanistan, and that’s why India is now a priority in US foreign and military policy.
This leads to the next question. Given the active India-US relationship, how does the US government view Russia-India cooperation such as military exercises?
The United States should accept it as a fact. The American government has no real leverage to compel the two countries to not carry out these exercises. Military exercises are an integral component of the bilateral relations between sovereign states in today’s world. The zero-sum game is long gone. Given current realities, India-US cooperation and active India-Russia cooperation are not mutually exclusive.
*This article is being posted from Toronto, Canada By DTN News ~ Defense-Technology News, contact: dtnnews@ymail.com
Related News
*Pyotr Veliky cruiser, INS Trishul to hold exercises in Arabian Sea
*The battle-cruiser Pyotr Veliky
*Russian cruiser Pyotr Veliky leaves India
*Russian navy launches major exercises with a review on board the Pyotr Velikiy
Multimedia
*Medvedev on board the heavy nuclear-powered cruiser Pyotr Veliky
*Russia's Pyotr Veliky nuclear-powered cruiser sails on mission in Indian Ocean
*Cruiser Pyotr Veliky in India
*Pyotr Veliky – flagship of the Northern Fleet
*Crew of Pyotr Veliky searches suspicious vessels
*Pyotr Veliky celebrates 12th birthday on high seas
*Russian cruiser Pyotr Veliky in India
Posted by DEFENSE NEWS at 9:15:00 PM