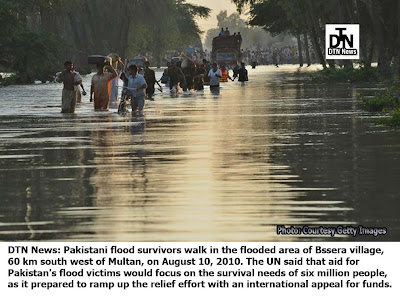 country.
Zardari's spokesman said he is being briefed near the Sukkur barrage in Sindh province, 15 days into the nation's worst-ever natural disaster, which appears to be worsening.
About 1,600 have been killed in the crisis and about two million people have been forced to leave their homes.
There has been extensive damage to infrastructure, crops and other agricultural resources due to the flooding, triggered by extensive monsoon rains.
As the floods were beginning Zardari embarked on trips to meet the leaders of the UK and France, returning via Syria, to much criticism at home and abroad.
Anger
Imran Khan, Al Jazeera's correspondent in the capital Islamabad, said: "People are very angry.
"I spent some time in Sindh province, Zardari's home province, and the anger was clear on the street with people saying, why is he gallivanting around Europe and when he was there why wasn't he getting money from other countries for the crisis?"
Imtiaz Gul, the head of the Centre for Research and Security Studies in Islamabad, said that the government was unable to cope with the situation and bad decisions had been made.
"President Zardari’s visit to Europe and Syria symbolizes the political leadership’s indifference and the lack of commitment to the plight of people of Pakistan."
However, Khan said that Zardari's visit to the affected region will be heavily stage managed and therefore he is likely to get a good reception.
The UN on Wednesday called for $459m to be raised to aid the estimated 14 million people affected by the flooding.
The money was said to represent the minimum needed for emergency assistance over the next three months and did not include anything for rebuilding infrastructure.
Farming hit
The UN also said that the cost of agricultural losses might reach billions of dollars. At least four million people are expected to need food assistance across Pakistan for the next three months at a cost of nearly $100m.
Khan said: "It is going to get worse. We are expecting weather systems to come in bringing in more rain.
"The government is failing to cope. But the UN has said that this is going to take weeks, months [to fix]. Nobody seems to have been prepared for a crisis of this size."
The US has said that the 19 helicopters and 1,000 marines it has pledged to assist relief efforts are close to the southern border of the country and would begin aid missions soon.
As the Muslim holy month of Ramadan began on Thursday in Pakistan, millions of flood-affected people also started daily fasting.
Many residents of the affected northwest are particularly pious, and said that they would not neglect fasting.
"I cannot disobey God, so I am fasting as it is part of my faith no matter what the conditions are," Fazal Rabi, 47, who was staying in a tent village in Akbarpura, said.
Related News;
Posted by DEFENSE NEWS at 9:41:00 AM