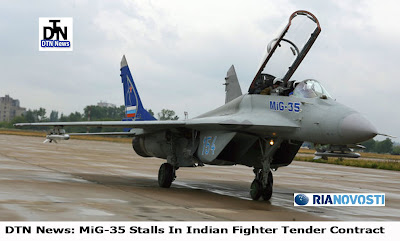 ake the short-list in a $10 billion international tender for 126 combat aircraft for the Indian air force, according to Indian media reports quoted by Kommersant daily.
The favorites to win the tender are the French Dassault Rafale and the Eurofighter Typhoon, Indian media say.
Russia's United Aircraft Corporation (UAC), the holding company for most of the Russian aircraft industry, and its fighter subsidiary MiG, have not officially confirmed the reports.
"The official results of the tender have not yet been announced," said UAC's Press Secretary Konstantin Lantratov.
"The MiG-35 is not leaving the tender, and I have no official information about this," said UAC First Vice-President Mikhail Pogosyan.
A MiG source quoted by Kommersant said it was too early to say what the Indians had decided.
"The envelopes with the commercial proposals should be studied by the tender commission only this week," the source said.
Several sources quoted by the paper listed a raft of problems around the MiG-35 program, including a lack of financing to support it. One source said the lack of state funding to support the program had been noted by UAC President Aleksei Fyodorov as long ago as the end of 2008, but the issue was not resolved.
The MiG-35 is said to be a cheaper aircraft than its rivals but is said to have problems with engine life.
"Time between overhauls should be at least 2000 hours and overall life 4000 hours, but the RD-33 doesn't meet these parameters now," said one source.
India already operates the early model MiG-29A fighter aircraft and is taking delivery of the MiG-29K naval fighter, which it will operate from a Russian-built aircraft carrier which is currently under refit.
The selection of two favored aircraft for the Indian tender follows a long trials process, which also involved Sweden's SAAB Gripen, America's Lockheed Martin with the F-16, and Boeing's F-18 Super Hornet, as well as the Russian MiG-35.
Related News
*Russia's MiG-35 fighter completely meets Indian tender requirements - arms exporter
*Russia to keep 2nd place in fighter jet exports until 2013
*Farnborough air show attracts 59 Russian firms
*Russia eyes new arms markets in Asia-Pacific region
Multimedia
*MiG-35. INFOgraphics
*MiG: between past and future
Posted by DEFENSE NEWS at 9:35:00 AM