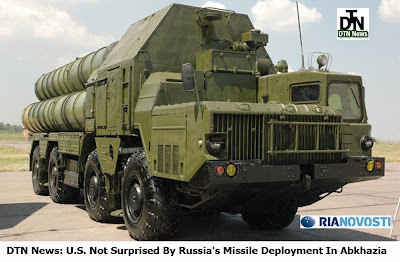 2010: Washington is not surprised by reports that Russia deployed S-300 air-defense systems on the territory of former Georgian republic of Abkhazia, the U.S. Department of State said.
Russian Air Force head Col. Gen. Alexander Zelin said on Wednesday S-300 systems had been placed in Abkhazia to protect the airspace of Abkhazia and South Ossetia. He did not say how many S-300s were deployed.
"I believe it's our understanding that Russia has had S-300 missiles in Abkhazia for the past two years," Philip Crowley, the department's assistant secretary, told a daily press briefing.
"There have been systems in Abkhazia for two years. We can't confirm whether they [Russia] have added to those systems or not... this is by itself is not necessarily a new development. That system has been in place for some time," he added.
The Georgian Foreign Ministry described the Russian move as "extremely dangerous and provocative" and threatening "not only the Black Sea region, but European security as a whole."
Russia recognized Abkhazia and South Ossetia two weeks after a five-day war with Georgia in August 2008, which began when Georgian forces attacked South Ossetia in an attempt to bring it back under central control.
Russia signed agreements with South Ossetia and Abkhazia earlier this year on establishing permanent military bases in the republics.
The bases are located in Gudauta, on Abkhazia's Black Sea coast, and in South Ossetia's capital, Tskhinvali. Each base hosts up to 1,700 servicemen, T-62 tanks, light armored vehicles, air defense systems and a variety of aircraft.
Related News
*Georgia decries Russian missile deployment in Abkhazia
*Abkhazia says Russian missile deployment 'under agreement'
*Russian S-300 systems in Abkhazia threaten regional balance of forces - Georgia
*Russia deploys S-300 air defense systems in Abkhazia (Update 1)
Multimedia
*The S-300P surface-to-air missile system. INFOgraphics
Posted by DEFENSE NEWS at 9:37:00 AM