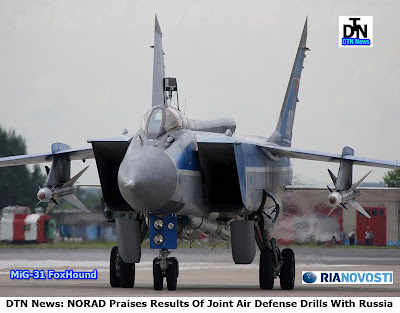 ts of joint anti-terrorism drills with the Russian Air Force and hope for further cooperation.
The exercise, dubbed Vigilant Eagle, was carried out on August 6-11, and involved Russian, Canadian and U.S. air force personnel operating from command centers at the Elmendorf airbase in Alaska, and in Khabarovsk, Russia.
"This exercise is one milestone in working together in other future efforts. Our folks are proud to be a part of such an important event and are passionate about partaking in efforts to protect our borders," Air Force Lt. Col. John Oberst was quoted as saying on the NORAD Website.
The exercise scenario, put together by NORAD and U.S. Northern Command, created a situation requiring both the Russian Air Force and NORAD to launch or divert fighter aircraft to investigate and follow a U.S. flagged Golfstream 4 plane on an international flight that has been taken over by terrorists.
"What we are practicing today is the communication procedures between NORAD, plus U.S. civilian air traffic control agencies and our Russian counterparts so that we can pass on information to them about air terrorism events to allow them to posture their forces to respond in kind," Canadian Forces Col. Todd Balfe, Alaska NORAD Region deputy commander, said.
The drills involved U.S. AWACS E-3B and Russian A-50 airborne warning and control aircraft, Russian MiG-31 and Su-27 fighters and U.S. F-22 interceptors, along with refueling aircraft from both countries.
The exercise was carried out under a cooperative military agreement between Russia and the United States, which tasks NORAD, the bi-national U.S. and Canadian command, and the Russian Air Force to conduct a live-fly exercise for up to five days.
Related News
*Russia, NORAD complete joint air defense drills
*NORAD, Russia to conduct first-ever joint air defense drills
*Russia-Japan rescue drills start in Sea of Japan
*Russia proposes Ukraine to conduct joint naval drills more often - Navy Commander
Multimedia
*Su-27 Flanker, one of 20th century's best combat aircraft
Posted by DEFENSE NEWS at 9:36:00 AM