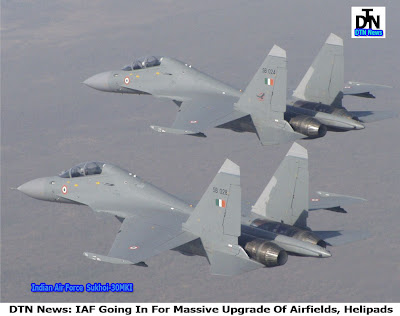 , IAF is going in for a massive upgrade of its airfield and helipad infrastructure across the country.
This will not only bolster operational logistics and flexibility on both the eastern and western fronts with China and Pakistan, apart from plugging existing gaps over central and peninsular India, but also make IAF airbases more accessible to civilian aircraft.
This is in tune with IAF's aim to have 42 fighter squadrons by 2022, up from the existing 32, with progressive induction of 270 Sukhois, 126 multi-role combat aircraft, 120 indigenous Tejas Light Combat aircraft and the first lot of the fifth-generation fighter aircraft to be developed with Russia.
A major endeavour in all this is the soon-to-be-launched MAFI (modernisation of airfield infrastructure) programme, under which 30 of IAF's 51 operational airbases will be upgraded in Phase-I over 42 months. "
Commercial negotiations with the Tata Power-led consortium for MAFI Phase-I, at a cost of around Rs 1,300 crore, is in the final stages now. Bhatinda airbase will be taken up as the pilot project,'' said a source.
Under Phase-II, remaining IAF, Army, Navy and Coast Guard airfields will be modernised. The upgrade includes resurfacing, expansion and lighting of runways for night operations as well as installation of new tactical navigational (TACAN), instrument landing (Cat-2 ILS), air traffic management and air-to-ground radio communication (RCAG) systems.
The North-East is a major thrust area, with upgrade of airbases in Chabua, Dibrugarh, Jorhat, Mohanbari, Hasimara, Guwahati and Bagdogra, among others. The Tezpur airbase already houses Sukhois after it underwent an upgrade last year.
Then, after reactivating western sector ALGs (advanced landing grounds) like Daulat Beg Oldi, Fukche and Nyama in eastern Ladakh, IAF is now concentrating on upgrading eastern sector ALGs like Pasighat, Mechuka, Walong, Tuting, Ziro and Vijaynagar as well as several helipads in Arunachal.
This is meant to strategically counter China's massive build-up of military infrastructure all along the 4,057-km Line of Actual Control, which includes 14 airbases directed against India in Tibet.
The focus on the western front, of course, remains as sharp as before. The Phalodi airbase in Rajasthan, just 102 km away from the Pakistan border, for instance, began fighter operations earlier this year.
"The aim is to make all the bases capable of operating all kinds of aircraft. This will, for instance, allow our IL-78 mid-air refuellers to support fighters from virtually anywhere in the country,'' said the source.
*This article is being posted from Toronto, Canada By DTN News ~ Defense-Technology News, contact: dtnnews@ymail.com