DTN News: US To Supply 2,526 Humvees To Afghan Forces 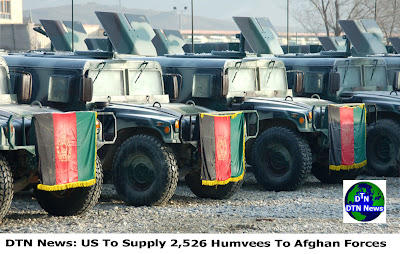 ct valued at $619 million for 2,526 High Mobility Multipurpose Wheeled Vehicles, or Humvees, for the Afghan police force and National Guard, the U.S. Defense Department said on Friday.
Work is to be performed in South Bend, Indiana, with a projected completion date of Dec. 31, 2013, the Pentagon's daily contract digest said. The contract was awarded July 30. One bid was solicited with one bid received, the notice said.
AM General is privately held. In December 1999, AM General and General Motors Co GM.UL finalized a deal to jointly pursue product, marketing and distribution opportunities for HUMMER brand vehicles much like their Humvee military cousins.
The High Mobility Multi-Purpose Wheeled Vehicle (HMMWV) uses independent suspensions and portal geared hubs similar to portal axles to make for a full 16 inches of ground clearance. The vehicle also has disc brakes on all 4 wheels, and 4-wheel double-wishbone suspension.
The brake disks are not mounted at the wheels as on conventional automobiles, but inboard mounted disk brakes, which are attached to the outside of each differential.
The front and rear differentials are Torsen type, and the center differential is regular, lockable type. There are at least 17 variants of the HMMWV in service with the United States armed forces.
HMMWVs serve as cargo/troop carriers, automatic weapons platforms, ambulances (four litter patients or eight ambulatory patients), M220 TOW missile carriers, M119 howitzer prime movers, M1097 Avenger Pedestal Mounted Stinger platforms, MRQ-12 direct air support vehicles, S250 shelter carriers, and other roles. The HMMWV is capable of fording 2.5 ft (76 cm) normally, or 5 ft (1.5 m) with the deep-water fording kits installed.
In June 1981, the Army awarded AM General a contract for development of several more prototype vehicles to be delivered to the U.S. government for another series of tests, and the company was later awarded the initial production contract for 55,000 HMMWVs to be delivered in 1985. HMMWVs first saw combat in Operation Just Cause, the US invasion of Panama in 1989.
The HMMWV has become the vehicular backbone of U.S. forces around the world. Over 10,000 were employed by coalition forces during Operation Iraqi Freedom, the 2003 invasion of Iraq.
International versions
*EQ2050/SQF2040 - Chinese versions of the HMMWV. 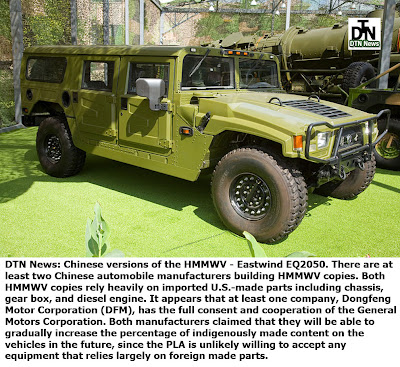 There are at least two Chinese automobile manufacturers building HMMWV copies. Both HMMWV copies rely heavily on imported U.S.-made parts including chassis, gear box, and diesel engine. It appears that at least one company, Dongfeng Motor Corporation (DFM), has the full consent and cooperation of the General Motors Corporation. Both manufacturers claimed that they will be able to gradually increase the percentage of indigenously made content on the vehicles in the future, since the PLA is unlikely willing to accept any equipment that relies largely on foreign made parts.
*Bulgaria - Bulgarian HMMWVs have been fitted with PKS heavy machine guns. Bulgaria usually replaces western machine guns on its vehicles to simplify maintenance, since the country is an active producer of Soviet/Russian-type ammunitions.
*Greece - Greek unarmored M1114, built entirely by ELBO in Greece, equipped to fire the Russian 9M133 Kornet ATGM. It has storage room for 10 missiles. Israel's Plasan has developed armored versions of the HMMWV, assembled by ELBO in Greece as the M1114GR and M1118GR.
*Plasan has also designed and supplied an HMMWV Armored Protection Kit for the Portuguese Army and a different version assembled by Automotive Industries in Nazareth for the Israel Defense Forces.
*Poland - Polish Land Forces currently operate 222 different variants of HMMWVes (5 unknown variants are operated by special forces). Over 200 are used by the 18th Airborne Battalion which is a part of the 6th Air Assault Brigade. The used variants are designated as follows: Tumak-2 - M1043A2, Tumak-3 - M1025A2, Tumak-4 - M1097A2, Tumak-5 - M1045A2, Tumak-6 - M1097A2 (variant used for transport of special containers), Tumak-7 - M1035A2. All vehicles are modified to meet Polish rules of the road and are equipped with Polish communication devices. 140 HMMWVes are equipped with Fonet digital internal communication device. 120 M1025A2s and M1043A2s have a rotatable mount which can be fitted with either the UKM-2000P 7.62 mm general purpose machine gun or the NSW-B 12.7 mm heavy machine gun. M1045A2s are used by anti-tank subunits and are armed with Spike-LR which can be dismounted in field conditions. Additionally Polish forces of ISAF operate 120 HMMWVes on loan from the US forces.
*The Swiss MOWAG Eagle light armored vehicle, designed for reconnaissance surveillance, liaison, escort, border patrol and police missions. Early versions of the Eagle utilize the HMMWV chassis, although the latest uses a Duro III chassis. It is an NBC-tight, air conditioned and armor protected vehicle. Eagle is in service and available in several configurations with varying levels of armor protection. The Eagle can be fitted with a wide assortment of armaments which can be manually or remotely operated turrets.
*Egypt - AOI has a project of fitting HMMWVs with anti armor weaponry, options include: TOW, Milan, or HOT missiles.
HMMWV replicas
Due to the popularity of the HMMWV, kits have been produced for the general market to build a HMMWV-lookalike at home. While the kits do not allow you to build a HMMWV from scratch (kitcar), they do allow you to turn a sedan into a HMMWV lookalike. An alternative is to buy a preconstructed (or "turnkey") wombat. Various kits exist, but one of the most famous names is the "Wombat" (previously called a HummBug). The former vehicle can be purchased for US$18,000; this puts it considerably cheaper than the actual HMMWV ($56,400.00), or Hummer. In Australia, a Gold Coast-based company called Rhino Buggies produces replicas of the Hummer H1 based on the Nissan Patrol 4WD vehicle for around AU$30,000.
Some local vehicle assemblers in the Philippines even make small and full-sized replicas of the HMMWV. They are usually mounted on chassis intended for jeeps, jeepneys, or (in case of the full-sized replica) small trucks, and is powered by surplus gasoline or diesel engines. It looks like a real HMMWV, but it is smaller in size, and is priced the same as an ordinary "owner-type" jeep (Php80,000 upwards).
Posted by DEFENSE NEWS at 7:53:00 PM