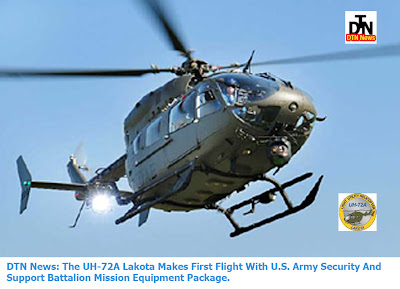 Utility Helicopter (LUH) equipped with the Security and Support Battalion (S&S Battalion) Mission Equipment Package (MEP) occurred in June at the company’s American Eurocopter facility in Columbus, Miss.
The S&S Battalion MEP will greatly expand the Lakota’s use for reconnaissance, command and control and air movement operations in support of U.S. homeland defense and security missions with the U.S. Army National Guard.
The maiden flight with this mission package on a UH-72A version represents another milestone in the Lakota’s highly successful development for the U.S. Army and also demonstrates EADS North America’s ability to evolve complex systems to meet warfighters’ mission needs.
“This is a very significant milestone in the maturation of the UH-72A Lakota for the U.S. Army and National Guard user,” said EADS North America COO David R. Oliver. “The fleet of Lakota aircraft is approaching 40,000 flight hours and as the Army continues to fly Lakotas they’re realizing the versatility and reliability of the aircraft. The S&S Battalion first flight illustrates the continued expansion and validation of the Lakota’s capabilities.”
When it enters service this MEP will be operated by U.S. Army National Guard Security and Support (S&S) Battalions, the new UH-72A version integrates a mission equipment package that includes a nose-mounted center line payload with infrared and electro-optical sensors and laser pointer, moving map and touch-screen displays, a video management system, digital video recorder and data downlink system, plus additional avionics and communications equipment. The helicopter will carry a 30 million candlepower searchlight and an external hoist.
U.S. Army National Guard S&S Battalions are located throughout the United States and provide a dispersed, readily available, light aviation capability for military missions and operations in support of civil authorities. These units currently operate aging Vietnam-era rotary-wing aircraft, which will be replaced by the UH-72A.
The UH-72A is produced in Columbus, Miss., by EADS North America’s operating unit, American Eurocopter, which built a dedicated assembly line for the Light Utility Helicopter. A systems integration facility was created at this site to manage the development of UH-72A’s mission equipment package for the Army National Guard S&S Battalion configuration.
A total of 345 UH-72As are planned to be acquired by the U.S. Army through 2015, approximately 200 will be assigned to the Army National Guard. Initially, 100 Lakotas are expected to be equipped with the mission equipment package for operation by the S&S Battalions.
EADS North America has delivered 125 UH-72As, all provided on time and within budget. These aircraft are being used in missions across the U.S and Puerto Rico that include medical evacuation (MEDEVAC), search and rescue, drug interdiction, VIP transport and general aviation support.
UH-72As also have been deployed overseas, with aircraft now located with the U.S. Army’s Joint Multinational Readiness Center (JMRC) in Germany for training and support operations, and on the Pacific Ocean’s Kwajalein Atoll for transport and support missions at the Army’s Ronald Reagan Ballistic Missile Defense Test Site.
Additionally, five H-72A versions are utilized by the U.S. Naval Test Pilot School at Patuxent River Naval Air Station, Md., for the training of test pilots from the U.S. military and allied countries.
The UH-72A is a Defense Acquisition Category (ACAT) I major defense acquisition program for the U.S. Defense Department, and it has marked one of the most rapid introductions of a new aircraft in the U.S. Army’s history. Deliveries of the aircraft to National Guard units allow aging OH-58 and UH-1 rotary-wing aircraft to be retired, while UH-72As assigned to the active component of the U.S. Army free up UH-60 Black Hawks for assignment to warfighting missions. About American Eurocopter (www.eurocopterusa.com)
American Eurocopter is a helicopter manufacturer that produces, markets, sells and supports the broadest range of civil and para-public helicopters offered by any manufacturer in the United States. The company is a subsidiary of EADS North America Holdings, the North American operations of EADS, a global leader in aerospace, defense and related services, and is an affiliate of Eurocopter, the largest helicopter manufacturer in the world. American Eurocopter’s product line represents the most cost-effective, technologically-advanced helicopters, ranging from light single to heavy twin, serving all markets and missions. Company headquarters and main facilities are located in Grand Prairie, TX, with a large manufacturing and production facility in Columbus, MS, that produces the UH-72A for the U.S. Army’s Light Utility Helicopter program.
About EADS North America (www.eadsnorthamerica.com)
EADS North America is the North American operation of EADS, a global leader in aerospace, defense and related services. As a leader in all sectors of defense and homeland security, EADS North America and its parent company, EADS, contribute over $11 billion to the U.S. economy annually and support more than 200,000 American jobs through its network of suppliers and services. Operating in 17 states, EADS North America offers a broad array of advanced solutions to its customers in the commercial, homeland security, aerospace and defense markets.
Posted by DEFENSE NEWS at 6:10:00 PM