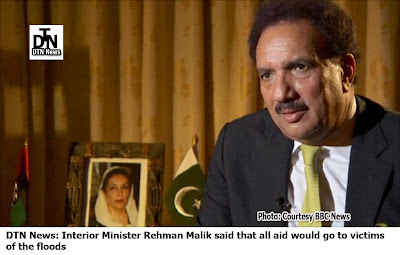 Interior Minister Rehman Malik told the BBC the Taliban would not be allowed to take advantage of the crisis to increase its support.
The UN has said it has now raised nearly half of the $460m (£294m) it needs for initial relief efforts.
Meanwhile new flood warnings have been issued in some areas of Pakistan. The authorities say as many as 20 million people are affected by the floods. The UN says six million desperately need emergency aid but most still have not received it. Ten of thousands of villages remain under water.
There are growing health concerns for those surviving without proper shelter, food or clean drinking water, three weeks after the country's worst natural disaster in modern times began. Overwhelmed
Survivors have criticised the government's response to the disaster, saying aid has been too slow to arrive and there are increasing reports of victims staging protests to demand help from the government.
Mr Malik said he was satisfied that the government had coped with the initial response but that it had been overwhelmed by the scale of the crisis.
The UN says aid has reached only a fraction of those in need
"What happened was never expected. In the history of the whole subcontinent there was never such a disaster," he said.
Mr Malik said he was aware of the danger that the Taliban could increase its foothold in flood-hit areas by taking on charitable roles and winning support from survivors.
But he said this would not be allowed to happen and blamed the concerns on internal "party politics".
The US ambassador to Pakistan, Anne Patterson, also played down the fears, saying stories that extremists groups were the only organisations involved in relief work in some areas were "greatly exaggerated".
The UK's International Development Minister, Andrew Mitchell, who has been visiting north-west Pakistan, said he felt the Pakistani relief teams were doing well in getting supplies to many of the victims, in the face of great difficulties.
He criticised the international community for being slow to act to tackle the crisis, saying the initial response had been "woefully inadequate", but welcomed the news that Canada and Australia had pledged more money towards the relief effort.
However, he said "more needs to be done" and said he hoped for a better response at a UN emergency meeting due to be held in New York on Thursday.
US Senator John Kerry, the head of the Senate Foreign Relations Committee, is also due in Pakistan to view relief efforts.
Pakistani President Asif Ali Zardari is travelling to Russia for a regional summit, but is only expected to stay for a few hours. Mr Zardari was criticised after not returning home from a trip to Europe earlier this month to deal with the growing crisis.
'Never expected'
There have been fresh flood warnings, with a series of towns in north-west Sindh, close to the border with 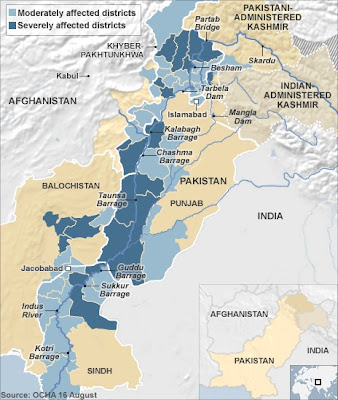 Baluchistan, placed on high alert. Rising floodwaters, carried by the River Indus, are travelling south and are expected to hit the region soon.
Donors are realising the scale of the disaster. But the challenges are absolutely massive and the floods are not over”End Quote Maurizio Giuliano UN spokesman
UN officials say the floods are now covering an area the size of England. At least 1,600 people have been killed, with health officials warning the toll could rise as water-borne diseases spread.
Aid agencies say six million people are in need of immediate assistance but many have received no aid at all.
The distribution of supplies has been hampered by severe damage to the country's infrastructure, with roads and bridges washed away or blocked by landslides.
The UN has been struggling to raise the money it says is urgently needed for the immediate relief effort.
UN spokesman Maurizio Giuliano told Reuters news agency there had "been an improvement" in donations, but he added: "The challenges are absolutely massive and the floods are not over."
Unicef, the UN's children's fund, called for "an urgent effort" from donors.
"Two million dollars are needed every day to provide water - this is not sustainable. We don't have two million dollars a day," said Unicef's regional director, Daniel Toole.
As well as buildings, large areas of crops and farmland have been washed away, leading to fears of food insecurity in the future.
"If immediate steps are not taken, we fear a famine," said Mian Iftikhar Hussain, a provincial information minister in north-west Pakistan.
"The farmers have lost everything: their crops, their machines, their houses, their seeds."
The World Bank has said it is redirecting $900m in existing loans to Pakistan to flood relief and recovery.
Pakistani officials have said it could take five years and up to $15bn for the country to recover.
BBC Urdu will transmit six daily bulletins in Urdu and Pashto providing vital information including how to stay safe, avoid disease and access aid. Special programmes will be broadcast each day in Urdu at 12.30, 15.30 and 18.30 and in Pashto at 12.45, 15.45 and 18.45 (local times).
*This article is being posted from Toronto, Canada By DTN News ~ Defense-Technology News, contact: dtnnews@ymail.com
Related News - More News On Pakistan’s Flood Disaster
Special report: Floods
Muddied waters of Pakistan flood aid
In pictures: Pakistanis wait for aid
Satellite tracks Pakistan floods
U.N. Secures More Pakistan Flood Relief Funds — Reuters
In Flooded Pakistan, a Lack of Basic Supplies — New York Times
Pakistan flood aid inadequate, U.N. warns — McClatchy News
U.N. Sounds Alarm on Aid for Pakistan — New York Times
Disease hovers over Pakistan’s flood-stricken children — Reuters
UN hopes to stave off ‘second wave of death’ in Pakistan — National Post
Despair as flood aid trickles in — The Age
Pakistan floods: EU pledges 30m euro aid boost — BBC News
Pakistan reassures aid donors – BBC
Pakistan Pledges Transparency To Ensure Flood Aid Arrives — Radio Free Europe
Eight die as doctors strike work in flood-hit Pakistan – Sify News
Insurgents, Police Clash Amid Pakistan Flooding — New York Times/Reuters
Militants Moving In Behind Pakistan Flood Waters — ABC News
Reports of looting, violence surface in flood-ravaged Pakistan — CNN
Pakistan Militants Attack Cops Amid Flood Chaos — CBS News
Pakistan Floods Could Sweep Away Weak Gov’t? — CBS News
Pakistan: An Urgent Call for Aid — New York Times editorial
Pakistan drowning: Floods could sink government — Ralph Peters, New York Post
Pakistan: A Trade Deal to Help Rebuild – New York Times editorial
Terrorists Capitalize on Pakistan’s Floods — Marisa Porges, Wall Street Journal
Posted by DEFENSE NEWS at 8:08:00 PM