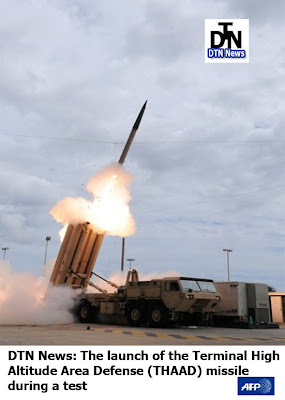 unced Tuesday that it has blocked a 400 million dollar contract with Lockheed Martin because a component in an army missile defense system had failed to pass key tests.
"A safety device on board the missile has not passed qualification tests as yet," said Richard Lehner, spokesman for the Pentagon's Missile Defense Agency. As a result, the agency withheld the contract to build the Terminal High Altitude Area Defense missile (THAAD), until the problem is fixed and it passes the required tests, he said.
The THAAD missiles, which are designed to intercept incoming short and medium-range ballistic missiles in the outer edges of the Earth's atmosphere, were expected to play a key role in US plans to shield US forces in the Middle East against Iranian missile attack.
Cheryl Amerine, a Lockheed Martin spokeswoman, said the contractor was working closely with the Pentagon to resolve the problems with the device, called an optical block switch.
"We are confident a solution is in place that will allow production to begin next month. We have taken responsibility for delivering the successful optical block switch solution as promised," she said in an email.
*Link to this article from source; "Pentagon Blocks 400 million Dollar Missile Defense Contract - AFP"
*This article is being posted from Toronto, Canada By DTN News ~ Defense-Technology News, contact: dtnnews@ymail.com
Posted by DEFENSE NEWS at 5:21:00 AM