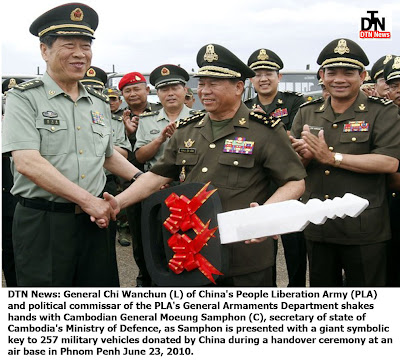 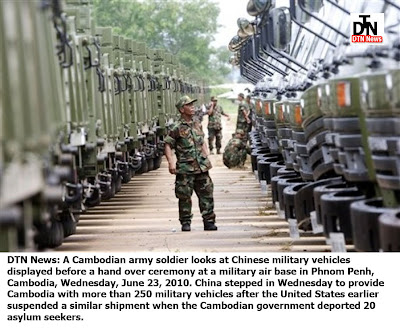 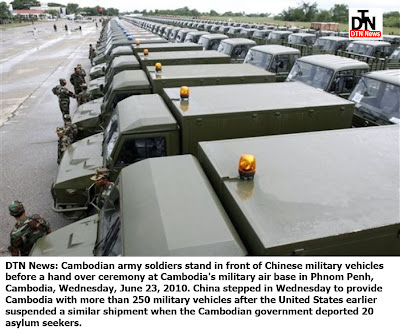 Hor Namhong said China would donate 257 military trucks and 50,000 military uniforms.
Military Trucks produced by China.
He said the gesture was made by Beijing of its own accord during a meeting in Shanghai between China’s President Hu Jintao and Cambodia’s Prime Minister Hun Sen.
“[Hun Sen] did not ask them, but they know our requirements, and [Hu Jintao] promised to provide further military assistance in the future,” he said.
China has growing business and strategic interests in Cambodia, and is Phnom Penh’s most important investor.
In the past four years Cambodia has approved more than 6 billion dollars of Chinese investment. Much of that is in infrastructure, particularly hydropower dams.
The investment figure excludes 880 million dollars in Chinese grant and aid during that period.
It also excludes 1.2 billion dollars in economic assistance awarded by China immediately after Cambodia expelled the 20 Uighur asylum-seekers in December at Beijing’s request.
Both countries denied any link between the two events, though that denial was not widely believed.
The expulsion of the Uighurs drew strong criticism from Washington, which promised penalties for Cambodia’s failure to meet its international obligations. Cancelling the shipment of US trucks was the first of those punishments.
Human rights workers have expressed rising concern at growing ties between private business and the military in Cambodia after Hun Sen encouraged business leaders to “adopt” military units.
Cambodian military regularly guard huge private land concessions across the country, and have been used in the past to evict the rural poor.
Posted by DEFENSE NEWS at 7:18:00 AM