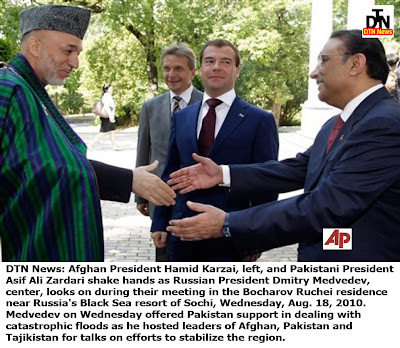 an for talks on efforts to stabilize the region.
Medvedev began his meeting with Pakistani President Asif Ali Zardari in Russia's Black Sea resort of Sochi by expressing condolences over the floods that have killed about 1,500 and affected some 20 million people — or one Pakistani in nine.
"We are mourning together with you and we are ready to provide all the necessary assistance," Medvedev said.
A Russian Emergency Situations Ministry plane delivered relief supplies to Pakistan on Tuesday, and another such flight will be conducted Thursday.
The four presidents are expected to issue a statement after their talks urging stronger international support for the flood victims.
The four-way talks at Medvedev's seaside residence will also focus on fighting terrorism and drugs spreading from Afghanistan. The Russian president has previously held similar talks, seeking to strengthen Russia's clout in the volatile region.
Before the joint meeting, he held separate bilateral talks with Zardari, Afghan President Hamid Karzai and Tajik leader Emomali Rakhmon.
"Russia fully supports Afghan efforts to restore civil peace in the country," Medvedev said in televised remarks at the start of the meeting. "We support the Afghan government's fight against terror and are ready to provide support for that."
Medvedev's foreign affairs adviser Sergei Prikhodko told reporters Tuesday that Russia was looking into a possibility of selling more helicopters to Afghanistan.
NATO has urged Russia to provide helicopters and training for the Afghan air force and to train more local police. Moscow has responded that it is willing to help — fearing that a return to power by Taliban extremists would destabilize ex-Soviet Central Asia and threaten Russia's security — but not for free and suggested that NATO help pay the costs.
Russia's Foreign Minister Sergey Lavrov told reporters Wednesday that Moscow would soon provide a free shipment of firearms for the Afghan Interior Ministry and step up training of its personnel.
Russian officials previously said that they planned to train about 200 Afghan policemen this year.
The Russian support for NATO- and U.S.-led operations so far has been limited to offering transit for railway shipments of non-lethal supplies and air corridors for weapons supplies, as supply routes through Pakistan have come under increased Taliban attack.
Russian officials also have strongly urged NATO and U.S. forces to do more to stem a flow of drugs from Afghanistan to Russia.
Medvedev told Karzai Wednesday that tackling Afghan drugs requires strong international cooperation. "It's our common problem, a problem for all countries of the region, and we must take consistent and coordinated actions," he said.
Afghanistan provides more than 90 percent of the heroin consumed in the world, and the bulk of it flows through ex-Soviet Central Asia and Russia.
The problem of drug abuse is of vital concern for Russia — where cheap, abundant Afghan heroin has helped fuel a surge in addiction rates, and injection drug use has been a key factor in the spread of the virus that causes AIDS.
*This article is being posted from Toronto, Canada By DTN News ~ Defense-Technology News, contact:dtnnews@ymail.com
Posted by DEFENSE NEWS at 10:12:00 AM