DTN News: The W62 Died For Our Sins ~ Nuclear, Biological And Chemical Weapons 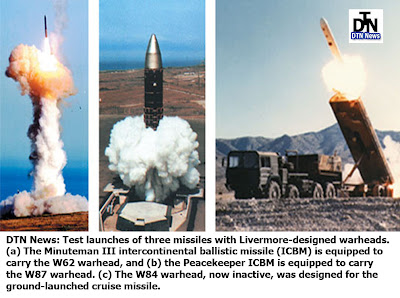 nited States has dismantled the last of 1,725 W62 nuclear warheads. Designed in the 1960s, the 115 kg/253 pound device had a yield of 170 kilotons. All were manufactured between 1970-76 and were used in Minuteman ICBMs.
Over the last five years, the W62 warheads on 300 Minuteman III missiles were replaced with refurbished warheads of more recent design and manufacture. These were W87 warheads, that were originally built for the Peacekeeper missile, which carried ten W87s each. But the last Peacekeeper was retired last year, for cost and disarmament treaty reasons.
The W87 warheads were checked over and reconfigured to work on the Minuteman. The W62 did not have as many safety or reliability features as the W87, and was more expensive to maintain. The W87 is a 1980s design. Each Minuteman now carries one warhead, although it was designed to carry three W62s. But the START II disarmament treaty restricts the missiles to one.
It took about $250 million to modify the W87s to work on Minuteman. One missile a week was converted, which is why it took so long. Both warheads contained a hydrogen (fusion) bomb, but the yield of the W87 is 300 kilotons. Both weapons, with their Re-entry Vehicle equipment, weigh about 363 kg/800 pounds each.
*This article is being posted from Toronto, Canada By DTN News ~ Defense-Technology News, contact: dtnnews@ymail.com
Disclaimer statement
Whilst every effort has been made to ensure the accuracy of the information supplied herein, DTN News ~ Defense-Technology News cannot be held responsible for any errors or omissions. Unless otherwise indicated, opinions expressed herein are those of the author of the page and do not necessarily represent the corporate views of DTN News ~ Defense-Technology News.
Posted by DEFENSE NEWS at 1:08:00 PM