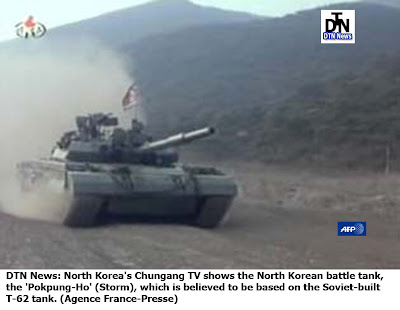 the performances of North Korea's latest main battle tank, believed to be the latest modification of the Soviet-built T-62, officials here said Aug. 17.
The North's Korean Central Television made public footage of the Pokpung-Ho (Storm) days ago. The rare release of such footage by the secretive North Koreans occurred in the tense aftermath of the March sinking of a South Korean warship near the western sea border.
Last month, South Korean and U.S. forces flexed their muscles during massive air and naval drills off the eastern coast of the peninsula, despite Pyongyang's warning that it would respond to the war games.
"The new tank appeared to have better mobility, survivability and firepower than the existing Chonma-Ho (Pegasus), apparently," a South Korean Ministry of National Defense official said on condition of anonymity. "We're still analyzing the … tank based on the footage from Pyongyang's state television station. The release of footage of the Pokpung-Ho was quite rare, as the existence of the new tank had sometimes been regarded as a rumor."
The Pokpung-Ho also is dubbed the M-2002, as the tank is presumed to have been rolled out in 2002, he added.
The North Korean People's Army is known to operate up to 800 T-62 variants.
Beginning in the late 1970s, North Korea started to produce a modified version of the 115mm gunned T-62 tank, and since then is believed to have made considerable modifications to the basic Soviet and Chinese designs.
According to a recent analysis published by Seoul's Defense Agency for Technology and Quality, an affiliate of the Defense Acquisition Program Administration, the Pokpung-Ho is believed to be armed with either a newly developed 125mm or 115mm main gun.
The improved version would be mounted with a 14.5mm KPV anti-aircraft machine gun, which is more powerful than the 12.7mm gun on older tanks, the analysis states.
Other improvements for the Pokpung-Ho include a laser rangefinder, an infrared searchlight and an up-to-date fire control system, according to the publication.
The North Korean Army is believed to have about 3,900 tanks, and only one elite mechanized unit would operate Pokpung-Hos.
The South Korean Army operates about 2,300 tanks, many of which will be replaced by the state-of-the-art K2 Black Panther main battle tank and modified K1A1 tank.
The K2, rolled out in 2007, is an amphibious tank armed with a locally developed 120mm/55-caliber stabilized smoothbore gun. Its 1,500-horsepower engine can power the tank to 70 kilometers per hour on paved roads and 50 kilometers off-road. It can cross rivers as deep as 4.1 meters.
Meanwhile, Seoul's Joint Chiefs of Staff revealed Aug. 16 that North Korea flew an unmanned aerial vehicle for surveillance or as a decoy after it fired nearly 1,200 artillery shells toward the disputed western sea border last week.
It was the first time that a North Korean drone had been spotted over the western waters, the scene of deadly naval battles in the past decade.
"The drone flew over the North's waters, some 20 kilometers north of South Korea's Yeonpyeong islands," said Lt. Col. Won Young-sup at the JCS' public affairs office. He declined to elaborate on the specifications of the North Korean spy plane.
*This article is being posted from Toronto, Canada By DTN News ~ Defense-Technology News, contact:dtnnews@ymail.com
Posted by DEFENSE NEWS at 1:09:00 PM