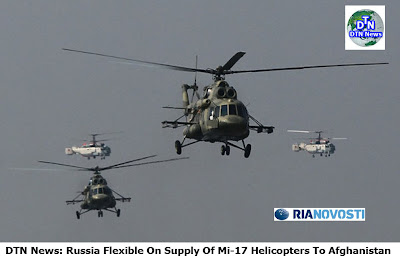 deal, a Kremlin aide said on Tuesday.
"The Russian side is definitely interested in this [deal]; there are no impediments on our side," Sergei Prikhodko said.
He said Russia was ready both to supply helicopters under a possible NATO contract and to be part of a U.S.-run tender for supplying helicopters to the Afghan military.
Prikhodko said the issue would be discussed during a meeting between Russian President Dmitry Medvedev and his Afghan counterpart Hamid Karzai in Sochi on Wednesday.
NATO Military Committee Chairman Giampaolo di Paola said in late July that Russia and NATO were discussing a possible deal on the supply of 27 Mi-17 helicopters to Afghanistan.
Russia's state-run arms exporter Rosoboronexport said in July it was preparing to compete in a U.S. tender to deliver Mi-17 helicopters to Afghanistan.
In May, the United States lifted sanctions against Rosoboronexport, blacklisting it from tendering for U.S. arms deals. The sanctions were imposed in 2006 after the U.S. government accused Rosoboronexport of violating the nuclear non-proliferation regime.
Despite the ban, dozens of Mi-17s have been bought by the United States for Afghanistan and Iraq over the past four years via intermediaries as commercial items, thus avoiding direct contacts with Rosoboronexport.
*Link to this article "Russia Flexible On Supply Of Mi-17 Helicopters To Afghanistan - Ria Novosti"
*This article is being posted from Toronto, Canada By DTN News ~ Defense-Technology News, contact: dtnnews@ymail.com
Related News
*Russia, NATO mull delivery of 27 Mi-17s to Afghanistan
*Russia to compete for Afghan helicopter supply tender
*Kazan helicopter plant expects 33% increase in sales in 2010
*Obama and the massive Afghan war leak
Posted by DEFENSE NEWS at 5:34:00 AM