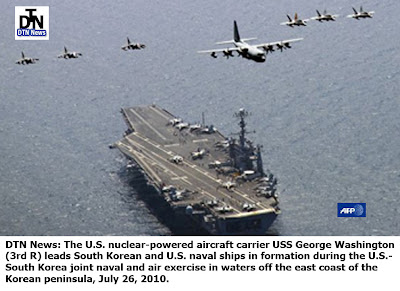 try's defense ministry as saying.
The two allies will conduct joint antisubmarine drills in the Yellow Sea in early September, Seoul's Ministry of National Defense said in a joint statement with the U.S. side.
But the details of the drills, including the exact date and military assets to be mobilized, are still under discussion, it added.
The upcoming drills, with an aim to improve the two allies' antisubmarine combat capability, will be "defensive in nature", it said.
The drills will follow two sets of large-scale joint military exercises recently held by Seoul and Washington in South Korea, under a framework agreed by top diplomats and defense officials from the two countries in late July.
At the so-called "two plus two" security talks, the two allies' foreign and defense ministers decided to stage a series of joint military drills, as countermeasures against the sinking of the South Korean warship Cheonan in March, which left 46 sailors dead. Seoul accused the Democratic People's Republic of Korea (DPRK) of torpedoing the warship, but Pyongyang denies its involvement.
After their four-day joint military drills, code-named " Invincible Spirit", in waters off the east coast of the divided Korean Peninsula late July, the two allies currently are carrying out 11-day war games dubbed the "Ulchi Freedom Guardian" (UFG).
On its part, Pyongyang has warned of counteractions against the UFG, criticizing it for heightening tension. It recently promised to deliver a "merciless counterblow" against the war games.
Related News:
DPRK says it has all means to defend itself
PYONGYANG, Aug. 18 (Xinhua) -- The Democratic People's Republic of Korea (DPRK) said Wednesday it was ready both for dialogue and war and had all the means and methods to defend itself.
The U.S. and South Korean authorities should understand there was a critical point in the tension and should not calculate they could evade the blame for the explosive situation, official news agency KCNA quoted a DPRK Foreign Ministry spokesman as saying. Full story
S Korea, U.S. wrap up joint military drills
SEOUL, July 28 (Xinhua) -- South Korea and the United States on Wednesday wrapped up the four-day joint military drills.
The two allies continued with anti-submarine exercises in waters off the east coast of the divided Korean Peninsula on the last day of the drills, in which the two nations' troops practiced transporting logistical support for the soldiers when they face aerial, underwater and maritime threats from enemy. Full story
U.S., S Korea start military drills amid concerns of neighboring countries
BEIJING, July 25 (Xinhua) -- The United States and South Korea launched their large-scale military drills in the Sea of Japan on Sunday, a move that is feared may further complicate security situation in the region.
Many analysts expressed the concern that the war games, which involve the Nimitz-class aircraft carrier USS George Washington, 20 ships and submarines and 200 aircraft, with about 8,000 troops on board, could highten tension on the Korean Peninsula, thus making dialogues more difficult in the near future. Full story
Related News
•S Korea's anti-terror drill kicks off as part of UFG
•DPRK condemns U.S., South Korean military exercises
•DPRK denounces S. Korean policy on north-south relations
•S.Korea, U.S. begin massive military exercise despite DPRK warnings
•S. Korean president proposes three-stage reunification with DPRK
Posted by DEFENSE NEWS at 5:35:00 AM