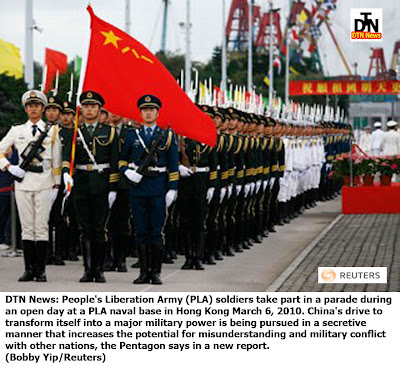 in a secretive manner that increases the potential for misunderstanding and military conflict with other nations, the Pentagon says in a new report.
The Defense Department's annual assessment, released Monday, says Beijing is upgrading its hefty arsenal of land-based missiles, modernizing its nuclear forces and expanding its fleet of attack submarines.
The effort comes as China has suspended military-to-military talks with the U.S., which could reassure the U.S. about the motives behind Beijing's military buildup.
U.S.-China relations have been particularly strained in recent months, as China rejected the results of an investigation blaming North Korea for the sinking of a South Korean warship. China's military buildup also is seen as a threat to the U.S. ability to defend Taiwan.
The congressionally mandated report doesn't contain any surprises. It's long been known that China — emerging as a world economic powerhouse — is pouring billions of dollars into offensive and defensive military capabilities to protect its regional interests.
But U.S. officials say the trend is disappointing because of the secrecy surrounding the moves, which make it difficult to gauge Beijing's intentions.
China has refused to meet with senior Pentagon officials this year, including Defense Secretary Robert Gates, who was rebuffed from traveling to China during a visit to Asia in June.
"It's been ambiguous over the past several months," a senior defense official said of how the Pentagon regards its relationship with China. The official, not authorized to speak publicly, spoke on condition of anonymity.
The report states that "the limited transparency in China's military and security affairs enhances uncertainty and increases the potential for misunderstanding and miscalculation."
China has been dismissive of U.S. accusations that the growth and modernization of its military poses a threat.
U.S. officials say China could do more to promote stability in its region and join Western nations in denouncing Iran and North Korea's nuclear ambitions.
"Beijing's answer has been sometimes yes and sometimes no," Adm. Mike Mullen, chairman of the Joint Chiefs of Staff, said earlier this year.
Among the findings in the Pentagon report is that China has as many as 1,150 short-range ballistic missiles and is acquiring an unknown number of medium-range missiles.
China also is developing artillery systems with the ability to strike across the Taiwan Strait, the report states.
*Link to this article "Pentagon - China's Military Power Growing - ABC News/International"
*This article is being posted from Toronto, Canada By DTN News ~ Defense-Technology News, contact: dtnnews@ymail.com
———
Online:
Pentagon report: http://www.defense.gov/pubs/pdfs/2010—CMPR—Final.pdf
Copyright 2010 The Associated Press. All rights reserved. This material may not be published, broadcast, rewritten, or redistributed
Related News:
*The Chinese Military ChallengeWall Street Journal
*Pentagon's China military report 'ignores objective truth,' says China Christian Science Monitor
*China firmly opposes US military report on China Xinhua
*Chinese Government Rejects Pentagon Report on Country's Military Ambition Bloomberg
*Book Calls Chinese Premier 'China's Best Actor'
*China's Soft Power a Threat to the West?
*Dreams of Glory: What Is China Thinking?
*The Canadian Press -Reuters Africa -Washington Postall 973 news articles »
Posted by DEFENSE NEWS at 5:38:00 AM