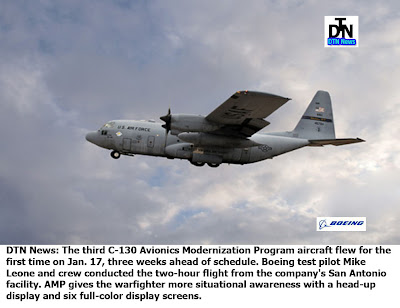 /A3O) has endorsed the company's C-130 Avionics Modernization Program (AMP) Head-Up Display (HUD) and Head-Down Primary Flight Display (HDPFD) as the aircraft's primary flight reference. The endorsement follows four years of design reviews, lab evaluations and demonstrations with the Air Force customer.
A primary flight reference is a requirement in all aircraft and must include airspeed, altitude and attitude data, as well as flight path information for the pilots. The C-130 AMP HUD is a transparent display of flight data that allows the pilots to maintain an "out-the-window" viewpoint rather than looking down at cockpit instruments as on a standard C-130. "This endorsement means C-130 AMP pilots can now use the HUD as their sole primary flight reference, allowing them to use their head-down displays for other data," said Mahesh Reddy, C-130 AMP program manager for Boeing. "We involved the Air Force customer from the beginning of the design reviews. This allowed them to ask questions along the way, become familiar with the product and make all necessary adjustments to the HUD design."
The C-130 AMP was approved for low-rate initial production (LRIP) on June 19. The first two LRIP aircraft are scheduled for induction in August and October at Warner Robins Air Logistics Center, Ga., where the Air Force will perform the Lot 1 installations. Boeing delivered the first two AMP kits and will upgrade five of the 20 LRIP aircraft.
*Note; Above image ~ The third C-130 Avionics Modernization Program aircraft flew for the first time on Jan. 17, three weeks ahead of schedule. Boeing test pilot Mike Leone and crew conducted the two-hour flight from the company's San Antonio facility. AMP gives the warfighter more situational awareness with a head-up display and six full-color display screens.
A unit of The Boeing Company, Boeing Defense, Space & Security is one of the world's largest defense, space and security businesses specializing in innovative and capabilities-driven customer solutions, and the world's largest and most versatile manufacturer of military aircraft. Headquartered in St. Louis, Boeing Defense, Space & Security is a $34 billion business with 68,000 employees worldwide.
Contact:
Jennifer Hogan
Maintenance, Modifications and Upgrades
Mobile: 405-818-7859
jennifer.c.hogan@boeing.com
Posted by DEFENSE NEWS at 10:56:00 AM