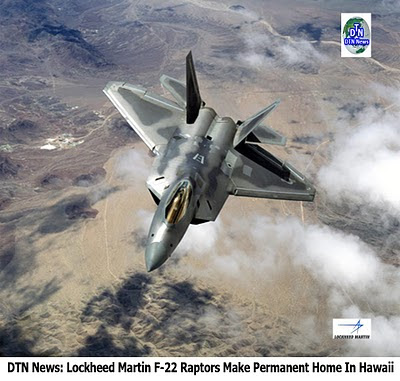 contract modification to provide sustainment for the F-22 program for calendar year 2010.
At this time, $241,645,563 has been obligated. ASC/WWUK,Wright-Patterson Air Force Base, Ohio, is the contracting agency (FA8611-08-C-2897 P00049) .
Why America Needs More F-22 Raptors
*Survival In Combat Against Modern Weapons
Proliferation of Advanced High Technology Missiles and Aircraft
Since the end of the Cold War, the Russian and Chinese defence industries have absorbed most of the advanced technology in the globalised market. The most recent generation of radars, Surface to Air Missiles and fighter aircraft they have developed can produce air defence systems which are completely impenetrable to all United States combat aircraft other than the F-22A Raptor and B-2A Spirit. The new stealthy Sukhoi PAK-FA directly challenges the F-22A Raptor. The result of this is that the United States will lose access to many theatres of operation on the global stage, as these new weapons proliferate, unless the United States deploys ~700 F-22A Raptors - the number originally planned for in the first place.
*There Are NO Alternatives to the F-22 Raptor
The F-35 Joint Strike Fighter is NOT a Substitute for the F-22 Raptor
The widely held view in Western bureaucratic circles, that the F-22 and F-35 are interchangeable aircraft, is not true and can never be true. The F-22 provides close to three times the capability of the F-35 at a similar unit procurement cost. The F-35 lacks the performance of the F-22, the survivability of the F-22, the firepower of the F-22, and the deployability of the F-22. The limitations of the F-35 are inherent in its basic design and cannot be fixed by design modifications or upgrades. Poorly defined basic specifications for the F-35 and inadequate prototyping have resulted in an expensive aircraft which cannot be used in combat situations other than benign, requires support by a lot of F-22 Raptors and aerial tankers, and requires long concrete runways for overseas deployments.
*Legacy Fighters Are No Longer Viable
Decline of the Legacy US Fighter Fleet of F-15s, F-16s and F/A-18s
Most of the legacy US fighter fleet was built during the late Cold War period, and was designed during the 1970-1980s. Not only are these aircraft no longer able to survive against modern Russian designed fighter and air defence technology, but the F-15C, F-16A-D and F/A-18A-D air combat fighters are increasingly suffering from airframe structural fatigue life exhaustion. Much of the F-15C fleet has also suffered from manufacturing defects in their structure, further shortening the life of these fighters. The F-117A Nighthawk stealth fighter fleet was recently retired altogether. Unless the United States industry manufactures a significant number of new and survivable fighters over the next decade, we will observe a large reduction in United States fighter fleet sizes. Of all of the fighters currently being produced in the United States, only the F-22 provides a good return on investment.
*Without sufficient numbers of F-22 Raptors the United States military will soon lose the conventional strategic advantage it has enjoyed since 1945.
Posted by DEFENSE NEWS at 12:10:00 AM