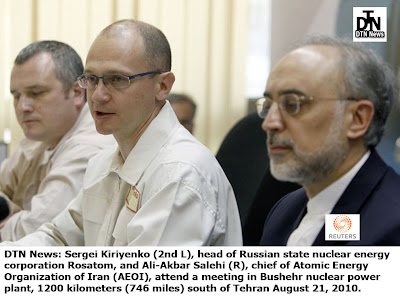 nuclear fuel into Iran's first atomic power plant Saturday amid international concern that the Islamic Republic is seeking a nuclear weapon.
State television showed what appeared to be fuel rods being loaded into the core of the reactor, which is on the shores of the Persian Gulf near the town of Bushehr. The plant is one of the first tangible results of Iran's controversial nuclear program, which has been the target of increasingly tough international sanctions.
Iranian officials, speaking during a ceremony in Bushehr, lauded the country's nuclear program and said the reactor was a symbol of Iran's international stature. It took more than 35 years to build the plant, with construction disrupted by the 1979 revolution, the war with Iraq in the 1980s and a decision by the original German contractor, Siemens, to pull out of the project.
"When a nation decides to live with freedom, it will finally reach its goal," Ali Akbar Salehi, who heads Iran's Atomic Energy Agency, told state media.
Russia's state nuclear corporation Rosatom helped finish the plant, which has cost Iran nearly $1 billion. Russia has pledged to supply the fuel for the plant, low enriched uranium, for the next 10 years.
The Iranian government insists that its nuclear development is for peaceful purposes, such as electricity production and medical research. While Iran says it has been open about its nuclear enrichment program, the United States and its allies say the Islamic Republic has concealed parts of it nuclear fuel program, possibly to build a nuclear weapon, something Iran denies.
Iranian officials say they fear that outside pressure could ultimately force Russia to stop supplying the nuclear fuel.
"We are looking for assurance of supply of fuel to the reactors," Salehi told reporters. He said Iran has had bad experiences with Germany and France, which had committed to starting up the reactor in the past but reneged on their promises.
"That was 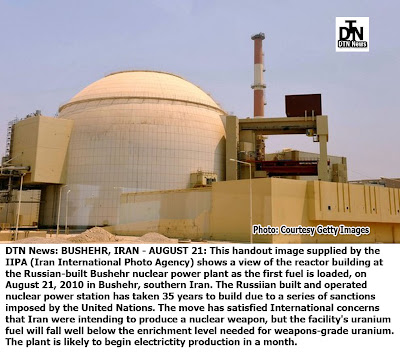 instrumental in making our government decide to have its own enrichment facilities in Iran," Salehi said. "We want to have the capacity and capability to assure the continuous supply of the fuel to the reactors."
Israeli officials said they were not particularly worried about the fuel being loaded into Bushehr. "Our problem is with the other facilities that they have, where they enrich uranium," Uzi Landau, Israel's minister of national infrastructure, said in an interview Thursday in Tel Aviv.
Landau said that although the reactor's operation would add to Iran's "technological know-how," the facility won't produce nuclear material for military use and spent fuel will be shipped back to Russia.
Contrary to other nuclear successes, Iranian officials and state television refrained from huge celebrations Saturday. President Mahmoud Ahmadinejad was not at the opening of the plant.
"Faced with international pressure, they are keeping a low profile," said Masallah Shamsolva'ezin, an analyst critical of the government. "Maybe they will need to make some kind of compromise in the future, so now might not be the time for nationalistic celebrations."
*Zacharia reported from Jerusalem.
*Link to this article "Iran Begins Fueling First Nuclear Power Plant - By Thomas Erdbrink and Janine Zacharia - Washington Post "
*This article is being posted from Toronto, Canada By DTN News ~ Defense-Technology News, contact: dtnnews@ymail.com
Posted by DEFENSE NEWS at 1:55:00 PM