DTN News: India To Get Russian Nuclear Submarine On Lease In Fall 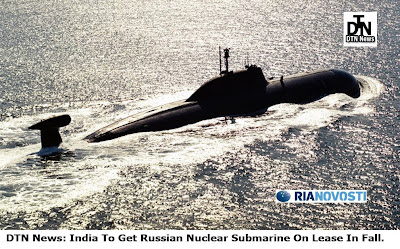 August 21, 2010: The Russian K-152 Nerpa nuclear attack submarine, which is currently carrying out workup trials in the Russian Far East, will be transferred to India on a 10-year lease in the fall, a spokesman for the Amur Shipbuilding Plant said on Friday.
The workup includes a training program for the Indian crew to ensure they can operate the submarine's systems, the spokesman said.
The lease contract, estimated at some $900 million, was drawn up following an agreement between Moscow and New Delhi in January 2004, in which India agreed to fund part of the Nerpa's construction.
The Nerpa was scheduled to be introduced into the Indian Navy as INS Chakra by mid-2008 but technical problems stalled the process.
Twenty sailors and technical workers were killed onboard the submarine shortly after the start of sea trials in November 2008, due to a toxic gas leak when the automatic fire extinguishing system malfunctioned. The boat is now fully operational following repairs.
*This article is being posted from Toronto, Canada By DTN News ~ Defense-Technology News, contact: dtnnews@ymail.com
Related News
*Russia to transfer its Nerpa nuclear sub to India in autumn 2010
*Russia's Nerpa nuclear sub to be 'fine-tuned' next month
*Nerpa nuclear attack submarine enters service with Russia's Navy
*Final trials of Russia's Nerpa sub to start next week
Multimedia
*K-152 Nerpa: Russian Akula II class nuclear attack submarine
Posted by DEFENSE NEWS at 9:47:00 AM