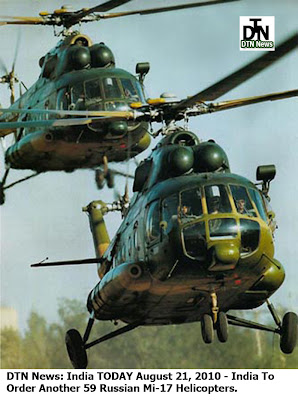 , the IAF chief said on Thursday.
The first deliveries of the 80 Mi-17 helicopters, ordered in 2008, will begin later this year, Air Chief Marshal Pradeep Vasant Naik said in an interview with India Strategic.
The Russian supply of 80 Mi-17s are to replace and augment its existing fleet of around 150 Mi-8 and Mi-17 medium-lift choppers, which have over five tonne load carrying capability and are also used to ferry troops and VIPs.
The Air Force had felt the need of inducting more medium-lift choppers after a spate of natural disasters following the tsunami in December, 2004 and the heavy snowfall in Kashmir in 2005.
Along with the induction of the new choppers, the IAF is also planning to upgrade over 50 choppers from its existing fleet of Mi-8s and Mi-17s.
"This will enhance the life of these Russian-origin choppers by at least another ten years," they said.
In the mountainous areas, Mi-17s have been used to ferry troops and carry loads up to heights of 18,000 feet along the Line of Control.
The Mi-17s are deployed for tasks like ferrying troops, airdropping supplies, evacuating casualties, search and rescue, and ferrying VIPs.
It can carry 15 fully equipped troops and some of these choppers have been equipped with 57 mm rocket pods and machine guns.
The IAF's recent request for 42 Su-30MKI fighters had been cleared by the Defense Ministry, "taking the total number of these air superiority combat jets order to a sizeable 272," he added.
The IAF has also signed a contract with Rosoboronexport, Russia's state-controlled arms exporting agency, to upgrade its fleet of Soviet-vintage MiG-29 fighters and Il-76 airlifters while the Indian Navy has placed an order for 45 MiG-29K carrier-borne fighter jets.
Naik said that the Il-76s, first acquired in April 1985, are also undergoing a life extension program with Russia.
"The life extension of Il-76 aircraft will involve a complete overhaul of the airframe at the manufacturer's premises in Russia... The first aircraft has already been sent and servicing work has commenced. Various other upgrades will be carried out in India. Post-servicing, the aircraft would be available to us for more than 10 years," he said.
*This article is being posted from Toronto, Canada By DTN News ~ Defense-Technology News, contact: dtnnews@ymail.com
Related News
*Russia's defense corporation signs contract on helicopter supplies to India
*Russia signs $1.5-bln fighter jet contract with India
*India set to buy 42 more Russian Su-30 fighter jets
*Russian MiG-29K jets officially enter service with Indian Navy
*Russia wins large contract to modernize Indian Su-30MKI fighters - media
Multimedia
*Su-30MKI (Flanker-H) multirole fighter
Posted by DEFENSE NEWS at 9:50:00 AM