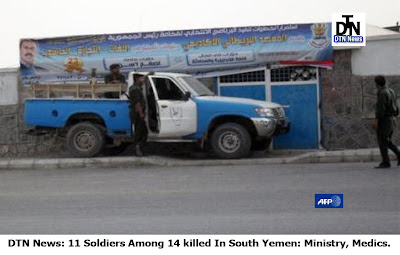 men in the southern city of Loder, the interior ministry said, and medics said three civilians also died.
The soldiers were killed "in an ambush set up by Al-Qaeda terrorists and outlaws cooperating with them," the ministry said.
Eight of the soldiers were killed when a rocket-propelled grenade hit their armoured vehicle, Loder regional security chief Yahya al-Barkani said.
The three civilians were killed -- and another four wounded -- when soldiers bombarded buildings near Loder market from where the military was being targeted, medical sources said.
The interior ministry said in a statement that the gunmen were "holed up in houses and certain areas near the marketplace in Loder."
Earlier, a local security source said the armed men involved in the firefight may have been Al-Qaeda members, but another local official said they could be linked to a southern separatist movement.
However, a member of the separatist Southern Movement coalition of secessionist groups categorically denied involvement.
"We reject such acts -- the Southern Movement uses only peaceful means to secure independence for the people of the south," Aydarus Haqis told AFP.
At the same time he condemned "the actions of the army, especially the indiscriminate shelling by tanks" of a residential area of Loder.
"Loder is a ghost-town, and fighting's going on in the streets. We don't know if the gunmen are Al-Qaeda or southern separatists," one local official told AFP, asking not to be identified.
Friday's fighting came a day after a two-hour clash in the same city, in the southern province of Abyan, in which gunmen killed two soldiers and wounded two others.
A local official said the gunmen involved in that incident "could be part of Al-Qaeda."
Thursday's firefight erupted after two soldiers were attacked in the marketplace and their weapons were seized, leading to the intervention of the army.
South Yemen is feared to have become a base for Al-Qaeda militants to regroup, under the network's local franchise Al-Qaeda in the Arabian Peninsula (AQAP).
Also on Thursday, Yemeni security forces said they had arrested a suspected Al-Qaeda militant who was sentenced to death for attacking a French ship and was among 23 prison escapees in 2006, a security official said.
Huzam Majali, considered a leading Al-Qaeda figure in Arhab, north of the capital, was arrested on Wednesday.
Majali was sentenced in August 2004 for his role in the deadly attack on French tanker the Limburg in October 2002 off Yemen's southeast coast. A blast ripped through the ship, killing a Bulgarian crewman and wounding 12 others.
Two years earlier, 17 US sailors were killed when two suicide bombers on an inflatable raft blew themselves up alongside the destroyer USS Cole in Yemen's southern port of Aden.
Yemen is the ancestral homeland of Al-Qaeda chief Osama bin Laden.
The south is also the site of frequent protests and separatist unrest, with southerners complaining of discrimination by the Sanaa government in the north over the allocation of resources.
It was independent from 1967 until 1990 when it united with the north. It seceded in 1994, sparking a short-lived conflict which ended with the south bring overrun by northern troops.
*Link to this article "11 Soldiers Among 14 killed In South Yemen: Ministry, Medics - AFP "
*This article is being posted from Toronto, Canada By DTN News ~ Defense-Technology News, contact: dtnnews@ymail.com
Posted by DEFENSE NEWS at 1:53:00 PM