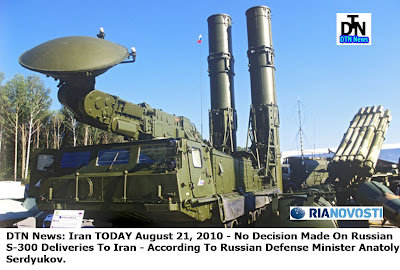 Russia signed a contract on delivering at least five S-300 systems to Iran in December 2005, but the contract's implementation has so far been delayed.
On June 9, the UN Security Council approved a fourth round of sanctions against Iran over its nuclear program, including tougher financial controls and an expanded arms embargo.
Later, the United States and the EU imposed extra sanctions against the Islamic republic.
The sale of S-300 air defense systems is believed to fall under the sanctions, though Russia said the delivery would not be affected since the weapons are not included in the UN Register of Conventional Arms.
The head of the Russian State Technology Corporation Rostekhnologii, Sergei Chemezov, said in July that the contract had not been cancelled.
*This article is being posted from Toronto, Canada By DTN News ~ Defense-Technology News, contact: dtnnews@ymail.com
Related News
*Switzerland toughens sanctions regime against Iran
*Washington says EU sanctions against Iran have effect on Tehran
*EU sanctions harm dialogue with Iran - expert
*U.S., EU sanctions on Iran disregard work of Iran Six - Russian Foreign Ministry (Update 1)
Multimedia
*Iran’s nuclear program: civilian purposes or nuclear weapons?
*The S-300P surface-to-air missile system. INFOgraphics
*Range of Iranian missiles: reality and plans
Posted by DEFENSE NEWS at 9:51:00 AM