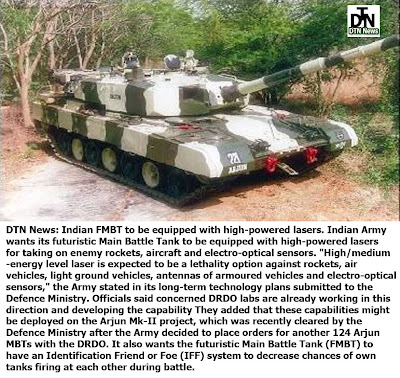 neration battle tank. Called the FMBT (Future Main Battle Tank), this vehicle aims to build on the success of the last Indian designed tank, the Arjun. This worries many Indian taxpayers, and soldiers. That's because the government recently ordered another 124 Arjuns. That came about because recent competitive tests between the Indian designed Arjun and Russian T-90 tank resulted in an unexpected victory by the Arjun. The Indian Army was compelled (by pro-Arjun politicians) to conduct a field test between the domestically designed (and largely rejected) Arjun tank, and the Russian T-90 (now considered the army's primary tank). Fourteen of each tank were used, and the results were classified. But journalists had no trouble getting unofficial reports that the Arjun managed to best the T-90 in tests of mobility, endurance and gunnery.
This was unusual because, until now, the Arjun was considered an expensive and embarrassing failure. Development of the Arjun began in the 1980s, and until four years ago, the army had received only five of them, for evaluation purposes. The evaluation did not go well. Originally, the Arjun was to have replaced thousands of Russian tanks, but after so many delays, the army only reluctantly accepted 128 Arjuns (equipping the 140th Armored Brigade). The new test reports resulted in renewed pressure on the army to buy more Arjuns. This pitted the Defense Ministry weapons development and procurement bureaucrats against the generals. The bureaucrats won this one. But the battle continues. That's because the recent tests assume that the Arjun has really fixed all the problems it was having with its electronics. In this case, it was the fire control system. But Arjun has also had problems with its engine, and that fact that its size and weight prevents it from being used with current tank transporters. Thus the FMBT is to be lighter (50 tons) and based on what works in the Arjun and other modern tanks. The FMBT is expected to replace older Russian tanks.
Meanwhile, last year, an Indian factory delivered the first ten (of a thousand) T-90 tanks to the Indian Army. The Russian designed armored vehicles are being built in India under license. Many of the components are Indian made, and some of the electronics are imported from Western suppliers. The Indian-made T-90s cost about $3 million each. India has already bought 700 Russian made T-90 tanks, at a cost of $3.5 million each. The FMBT is expected to cost over $5 million each. The high price is due to a lot of high tech. This includes an active defense system to defeat anti-tank missiles, a much more powerful engine, lots of electronics and a hermetically sealed crew department to provide protection against chemical weapons and radiation. All this stuff is tricky to develop, just the sort of thing DRDO excels as screwing up. This is mostly the fault of the DRDO bureaucrats, who are not very good at using all the technical and manufacturing talent India has.
Four years ago, India adopted the Russian T-90 as its new main battle tank. By 2020, India will have 2,000 upgraded T-72s, over 1,500 T-90s, and few hundred other tanks (including a few Arjuns). This will be the most powerful armored force in Eurasia, unless China moves ahead with upgrades to its tank force. The border between China and India is high in the Himalayan mountains, which is not good tank country. India's tank force is mainly for use against Pakistan.
The T-90 is a highly evolved T-72. Originally, the T-90 was done as a fall-back design. The T-80 was supposed to be the successor to the T-72. But like the T-62 and T-64 before it, the T-80 didn't quite work out as planned. So the T-72, with a much improved turret and all manner of gadgets, was trotted out as the T-90. Weighting 47 tons, it's 23 feet long, 11 feet wide and 7.5 feet high. Same package, better contents. And with well trained crews, it can be deadly. The Arjun is a larger vehicle (59 tons, 34.9 feet long and 12.7 feet wide).
The FMBT will probably be more similar in size to the T-90. Indian armor experts, both military and civilian, are hoping the FMBT is based more on the T-90 than the Arjun. But the most worrisome aspect of the FMBT project is DRDO (Defense R&D Organization), which also developed Arjun. It's feared that the DRDO wonks have not learned from the many errors made with the Arjun. Journalists are digging to find out how legitimate the field tests between the T-90 and Arjun were. It's feared the competition was fixed, something that is not unknown in Indian defense matters. While military procurement is political in all countries, India has had more than its share of problems here. The hope is that the FMBT will not be another DRDO disaster.
*This article is being posted from Toronto, Canada By DTN News ~ Defense-Technology News, contact: dtnnews@ymail.com
Disclaimer statement
Whilst every effort has been made to ensure the accuracy of the information supplied herein, DTN News ~ Defense-Technology News cannot be held responsible for any errors or omissions. Unless otherwise indicated, opinions expressed herein are those of the author of the page and do not necessarily represent the corporate views of DTN News ~ Defense-Technology News.
Posted by DEFENSE NEWS at 10:11:00 PM