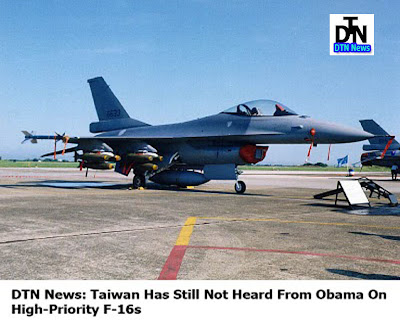 ted States to defend itself -- apparently from a potential Chinese military threat -- in the wake of the latest Pentagon report on China's military might.
Receiving visiting U.S. Senator Roland Burris on Thursday, Taiwan President Ma Ying-jeou requested the U.S. government to "cautiously consider selling F-16C/Ds to Taiwan as the balance of cross-Strait military power is tipping in China's favor.
"He justified his persistent appeals for American fighter planes saying that "Taiwan people's top concern is Taiwan's security."
In a report released on Monday, the U.S. Defense Department expressed concern over Beijing's expanding military capabilities directed at Taiwan, saying "the balance of cross-Strait military forces continues to shift in the mainland's favor."
The report drew protest from Chinese government over its "interfering nature, distortion of facts, and baseless speculations." The Chinese Defense Ministry condemned the Pentagon report, and clarified that its military "does not pose a threat to any nation." Responding to the report, Taiwan's Defense Ministry spokesman Yu Sy-Tue said China "has not renounced the use of force against Taiwan yet," and added that the "Ministry is aware of China's military build-up and its military drills."
Pentagon's report on Chinese military, updated every year since 2000, is also submitted to the U.S. Congress. The report was published at a time of strained relations between the two countries. America's recent joint military drills with South Korea and Vietnam in the Yellow Sea added to the tensions in China-U.S. ties.
This is the second time within a fortnight that Taipei is pressing Washington for combat-aircraft.
Receiving a delegation from the U.S. Center for Strategic and International Studies earlier this month, Ma Ying-jeou said armament like the C/D versions of F-16 fighter jets are necessary "not to increase our attack power, but to replace outdated warplanes."
He added that while Taiwan-U.S. military cooperation was important to Taipei, equally important was the need to reduce tension in the Taiwan Strait. He reminded Washington to keep its commitment to sell arms under the Taiwan Relations Act.
Ma, who has been taking steps to reduce tension with China since he assumed power in May 2008, made it clear that Taipei was not interested in an arms race with its giant neighbor.
At the same time, he repeatedly urged China to remove the missiles facing Taiwan as a condition for Taipei discussing a peace pact with Beijing, which turned a dumb ear to it.
In February, the East Asian island nation sought the supply of 66 advanced F-16C/Ds warplanes and submarines from the U.S. to replace the outdated models. The request is "still being evaluated" by the Obama administration.
China warned the United States to cancel arms sales to Taiwan or face severe consequences. Any action that helps strengthen Taiwanese administration annoys Beijing, which still considers it part of China and does not recognize its political independence.
On the other side, besides being actively engaged in voluminous trade with the U.S., Taiwan also relies on that country as a guarantor of its security against any attack from Communist China, which claims the democratically ruled island as its own under the "one China" policy.
China expedited modernization of its military in the 1990s, which consequently brought it among the world's biggest military spenders with an estimated $100 billion defense budget in 2009, second only to the United States.
*Link "Fearing China, Taiwan Pleads For US Warplanes" by RTT Staff - Writer For comments and feedback: contact editorial@rttnews.com
*This article is being posted from Toronto, Canada By DTN News ~ Defense-Technology News, contact: dtnnews@ymail.com
Posted by DEFENSE NEWS at 11:45:00 AM