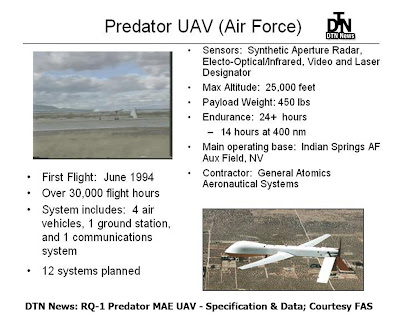 ive) them Predator UAVs. The Americans refused, at first quietly, but now openly. The U.S. has offered three units of the smaller (160 kg) Shadow 200 models. These are widely used by the U.S. Army, but are not large enough to carry 45 kg Hellfire missiles, like the one ton Predator does. The U.S. doesn't want Pakistan to have Predator/Hellfire partly to keep the technology away from China, partly to keep the systems from being used to kill tribal leaders the U.S. does not consider hostile. The U.S. also fears Pakistan would use Predators used against India. Above all, these UAVs are in big demand by American and NATO forces, who have priority.
The Pakistanis are also prone to corruption, and giving them missile armed Predators would encourage Taliban and tribal leaders to offer money, or cooperation, to avoid a Hellfire missile. You can't bribe the Americans, which is what really annoys many Pakistanis. What also annoys Pakistanis is the Americans constantly pointing out that Islamic terrorists are killing far more Pakistanis than the Indian armed forces, and the two countries have not fought a way for over 30 years. Yet Pakistan still keeps most of its security forces aimed at India, while India pays more attention to the Chinese threat.
Pakistan has another problem in that the most prolific exporter of world class UAVs, Israel, is one nation Pakistan officially hates and cannot do business with. The only other supplier of first rate UAVs is the United States. Some European nations are developing first rate UAVs, but these are not available yet.
Each RQ-7B Shadow 200 UAV unit requires 20-30 troops to operate and maintain four UAVs and the ground control equipment. Typically, each combat brigade has one Shadow UAV system. Export customers pay about $16 million for each RQ-7B system, and this includes spare parts, technical assistance and training.
The Shadow 200 UAVs cost $500,000 each, and can stay in the air six hours per sortie. A day camera and night vision camera is carried on each aircraft. Able to fly as high as 4,900 meters/15,000 feet, the Shadow can thus go into hostile territory and stay high enough (over 3,200 meters/10,000 feet) to be safe from hostile rifle and machine-gun fire.
In Iraq and Afghanistan, most Shadow missions were at a lower altitude, and often over a city or town. Brigade and battalion commanders can then get a constant top down view of what's happening down below. Although this sort of thing is technically possible with a commander in a helicopter overhead, the helicopter attracts too much enemy fire to make this practical for any length of time, and are much more expensive to operate. The Shadow UAV, however, can fly high enough in day time to be safe from enemy fire. A night, the Shadow can come down lower because they are difficult to spot in the dark.
Meanwhile, the U.S. has also offered Pakistan the smaller ScanEagle UAV, which has a longer endurance. The ScanEagle UAV weighs 18 kg (40 pounds), has a ten foot (three meter) wingspan and uses a new video technology (PixonVision), that provides greater resolution than other video cameras. The ScanEagle can stay in the air for up to 15 hours per flight, and fly as high as 5,200 meters (16,000 feet). The aircraft carries an optical system that is stabilized to keep the cameras focused on an object while the UAV moves. The UAV can operate at least a hundred kilometers from the controller. The ScanEagle is launched from a catapult and landed via a wing hook that catches a rope hanging from a fifty foot pole. Each ScanEagle costs about $100,000, and is widely used by commercial fishing, ocean survey and research ships.
*This article is being posted from Toronto, Canada By DTN News ~ Defense-Technology News, contact: dtnnews@ymail.com
Disclaimer statement
Whilst every effort has been made to ensure the accuracy of the information supplied herein, DTN News ~ Defense-Technology News cannot be held responsible for any errors or omissions. Unless otherwise indicated, opinions expressed herein are those of the author of the page and do not necessarily represent the corporate views of DTN News ~ Defense-Technology News.
Posted by DEFENSE NEWS at 10:05:00 PM