Pakistan's former president Pervez Musharraf has claimed he was not told about Britain's disapproval of torture, and has no recollection of being told that his country's intelligence agency, the ISI, should not torture British subjects. 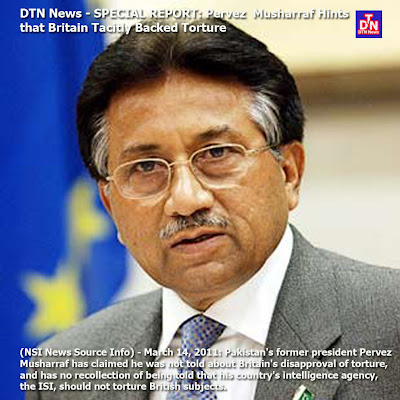 "Never. Never once, I don't remember it all", he says in an interview to be broadcast on Monday night. He adds: "Maybe they wanted us to continue to do whatever we were doing; it was a tacit approval."

Musharraf was president of Pakistan from 1999 to 2008, at a time when British subjects were abused in his country's jails, according to evidence heard in British courts. One, Binyam Mohamed, was held unlawfully. MI5 gave the CIA information about the Ethiopian-born UK resident, in behaviour condemned by high court and appeal court judges in Britain.

Musharraf's provocative and controversial remarks are made in an interview for The Secret War on Terror, on BBC2.

He says: "We are dealing with vicious people and you have to get information. Now if you are extremely decent we then don't get any information... We need to allow leeway to the intelligence operatives, the people who interrogate."

However, Lady Eliza Manningham-Buller, the former director-general of MI5, said he was "wrong" and denied "a blind eye had been turned". She said: "No … there was no tacit approval of torture." She added: "I think this raises a much broader question.

"Al-Qaida is a global threat. To counter it we need to talk to services throughout the world. We have to be careful and cautious in those relationships, but to decide that we are never going to talk to the following 50 countries in any circumstances means that you are deciding deliberately not to try and find out information that you need to know."

Sir David Omand, the government's former security and intelligence adviser, tells the programme: "I am very clear we are not and have not been complicit in torture and I'm in no doubt that all the countries concerned including Pakistan and the United States were very well aware of what British policy was, which was we don't do this and we don't ask other people to do it."

The Security Service, MI5, and the Secret Intelligence Service, MI6, strongly deny that they "outsource" torture to other countries, or take any part in promoting it.

However, they do act on information passed to them even if it could have been obtained by torture in what they describe as "passive" involvement.

In a recent judgment, the appeal court stressed that using such information for intelligence purposes was one thing. But it could not be used as evidence in a trial.

Sir John Sawers, the head of MI6, said last year: "Torture is illegal and abhorrent under any circumstances, and we have nothing whatsoever to do with it."

He continued: "If we know or believe action by us will lead to torture taking place, we're required by UK and international law to avoid that action. And we do, even though that allows the terrorist activity to go ahead."

Sawers went on: "Yet if we hold back, and don't pass on that intelligence, out of concern that a suspect terrorist may be badly treated, innocent lives may be lost that we could have saved.

"These are not abstract questions for philosophy courses or searching editorials. They are real, constant, operational dilemmas."