The military has grounded its entire fleet of 10 F-35 fighter jets built by Lockheed Martin Corp while it investigates a dual generator failure and an oil leak that occurred during a flight test last week, the company said. 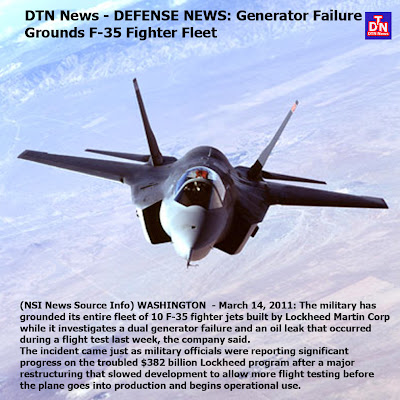 The incident came just as military officials were reporting significant progress on the troubled $382 billion Lockheed program after a major restructuring that slowed development to allow more flight testing before the plane goes into production and begins operational use.

Lockheed spokesman John Kent said the problem occurred on the AF-4, one of the Air Force variants being tested at Edwards Air Force Base in southern California, but the jet was able to return to base safely.

Lockheed and the Pentagon's Joint Strike Fighter program office were investigating what caused two power generators to fail during a flight test on March 9, he said, describing the fleet-wide grounding as a "routine safety precaution."

"Once the cause is known, the appropriate repairs and improvements will be made before flight operations resume," he said, adding that he expected the issue to be resolved soon.

Lockheed is developing the three variants of the F-35 Joint Strike Fighter with eight international partners to replace over 13 different planes now operated by the U.S. Air Force, Navy and Marine Corps and foreign militaries.

The program has seen costs increase sharply, particularly on a short takeoff, vertical landing (STOVL) variant being developed for the Marines.

But military officials cited significant progress on development and flight testing of the new warplane during congressional testimony this past week.

As of March 8, the program had conducted 697 flight tests and surpassed 1,000 hours of flight testing, Kent said. The STOVL variant has executed 51 vertical landings this year alone, up from 10 last year.

"Once this has passed, we certainly expect to get back on that tempo," he said.

Kent said it was still unclear what caused the failure of the power generators and the oil leak, but the warplane was developed with multiple redundancies for just such scenarios.

The plane has an integrated power package that acts as a starter, air conditioner and back-up power generator, Kent said, although he said it was not clear if that system had been used on the jet's return to the air base.