French President Nicolas Sarkozy promised Brazil his government would support Dassault's proposed technology transfer of its new fighter jet as the company seeks an edge in its bid to win a multibillion-dollar Brazilian military contract. 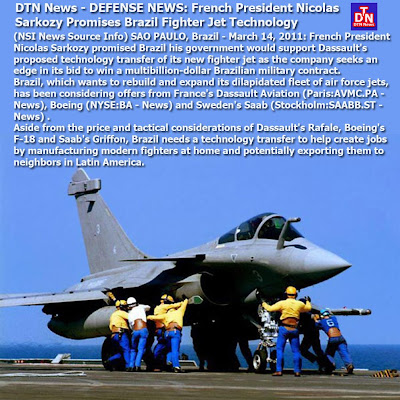 Aside from the price and tactical considerations of Dassault's Rafale, Boeing's F-18 and Saab's Griffon, Brazil needs a technology transfer to help create jobs by manufacturing modern fighters at home and potentially exporting them to neighbors in Latin America.

Dassault's Rafale, which has been struggling to repeat the success of foreign sales of the company's Mirage jet, appeared close to clinching its first foreign deal with former Brazilian President Luiz Inacio Lula da Silva, who had said he preferred the French plane over its rivals.

But Lula's successor, Dilma Rousseff, appears to be leaning toward Boeing's F-18 after saying she wanted to rethink all the finalists' bids. Since taking office in January, Rousseff has pursued stronger political ties with the United States.

She met with Senator John McCain earlier this year in Brasilia and is preparing to welcome U.S. President Barack Obama next week in his first visit to Latin America's largest country.

In an interview published on Saturday in Brazilian magazine Veja, Sarkozy said the French government would guarantee the transfer of core technology for the Rafale if Brazil opted for the Dassault bid to provide 36 jets.

"The offer that we made is accompanied by the unrestricted transfer of technology guaranteed by the French state," Sarkozy said, "which neither of the other two competitors have the condition to do with credibility."

The proposed deals, with initial offers ranging from $4 billion to $6 billion, potentially involves the purchase of more than 100 aircraft.

The deal is the cornerstone of Brazil's plans to bolster defense capabilities as it tries to leverage its growing economy into global political clout.