Forces from Gulf Cooperation Council (GCC) countries will enter Bahrain to help the Bahraini regime quell unrest, according to a number of media reports, including by Bahrain’s Alyam newspaper, known for its close links with the ruling al-Khalifa family. The reports come one day after clashes occurred between Shiite protesters and police in the capital, Manama. Meanwhile, Bahraini state media reported that the Independent Bloc (a parliamentary bloc of the Bahraini parliament) asked Bahraini King Hamad bin Isa al-Khalifa to enforce martial law to contain the unrest. 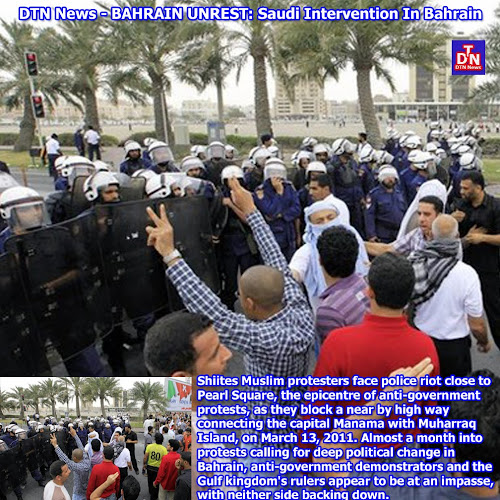 These reports suggest that foreign intervention in Bahrain, or at least the possibility that the Bahraini military is taking over the security reins, is imminent. Such a move would mean the regime is getting increasingly concerned with Shiite unrest, which does not appear to be subsiding despite calls for dialogue from Bahraini Crown Prince Sheikh Salman bin Hamad al-Khalifa.

Troops from the United Arab Emirates are reportedly expected to arrive March 14. Al Arabiya reported that Saudi forces have already entered Bahrain, but these claims have yet to be officially confirmed by the Bahraini regime. The only announcement thus far has come from Nabil al-Hamar, the former information minister and adviser to the royal family, who wrote on Twitter that the Arab forces arrived in Bahrain. An unnamed Saudi official also said March 14 that more than 1,000 Saudi troops from the GCC’s Peninsula Shield military force entered Bahrain late March 13, AFP reported.

The ongoing tensions are exacerbated by the split between Bahrain’s Shiite movement, which became clearer during protests onMarch 11. The more hard-line faction of the Shiite movement, led by the Wafa and Haq blocs, has been increasing the unrest on the streets in the hopes of stalling the talks between the Shiite Al Wefaq-led coalition’s negotiations with the regime. Military intervention by the GCC countries would mean the situation is increasingly untenable for the regime. The paradox the Bahraini regime faces is that it cannot contain the unrest while trying to kick off talks with Al Wefaq. Al Wefaq finds itself in a difficult position, since it risks losing ground against hard-liners if it appears too close to the regime while Shiite protesters are beaten by the police.

The Bahraini regime has used the military option before. On Feb. 17, the military deployed immediately after a police crackdown in Manama’s Pearl Square and was able to calm down the situation for a while by encircling the area with tanks. If Bahrain indeed has requested Saudi intervention this time, the implication is that the Bahraini military is not confident in its ability to contain the unrest now. Riyadh’s decision to send forces to Manama could be taken for this reason, since wider spread of Shiite unrest from Bahrain to Saudi Arabia would aggravate the already existing protests among Saudi Arabia’s own Shiite population. Saudi military intervention in Bahrain is also not unprecedented; Saudi Arabia sent troops to Bahrain in 1994 when Riyadh determined that Shiite unrest threatened the al-Khalifa regime.

The regional implications of the unrest in Bahrain were underscored when U.S. Defense Secretary Robert Gates visited Manama on March 12 and urged the Bahraini regime to implement bold reforms. Gates said Iranian interference would become a greater possibility if Bahrain fails to do so. While Bahrain and Saudi Arabia seem to be coordinating to avoid that possibility, it is not without risks. Leader of the hard-line Haq movement Hassan Mushaima, who is believed to be increasing the Shiite unrest in Bahrain with Iranian support, said Feb. 28 that Saudi intervention in Bahrain would give Iran the same right to intervene as well. A scenario of regional Sunni Arab forces cracking down on Shia would apply pressure on Iran to respond more overtly, but its military ability is limited and it is a very risky option given the U.S. 5th Fleet is stationed in Bahrain. As of this writing, there is no sign that the Iranian military is taking steps toward that end, however, the situation on the ground could escalate if Shia in Bahrain ramp-up demonstrations.