Saudi Arabia is leading a coalition force into Bahrain to help the government calm the unrest there. This move puts Iran in a difficult position, as Tehran had hoped to use the uprising in Bahrain to promote instability in the Persian Gulf region. Iran could refrain from acting and lose an opportunity to destabilize the region, or it could choose from several other options that do not seem particularly effective. 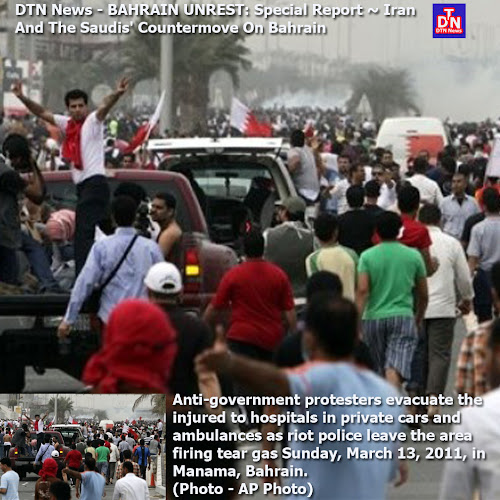 The Bahrain uprising consists of two parts, as all revolutions do. The first is genuine grievances by the majority Shiite population — the local issues and divisions. The second is the interests of foreign powers in Bahrain. It is not one or the other. It is both.

The Iranians clearly benefit from an uprising in Bahrain. It places the U.S. 5th Fleet’s basing in jeopardy, puts the United States in a difficult position and threatens the stability of other Persian Gulf Arab states. For the Iranians, the uprisings in North Africa and their spread to the Arabian Peninsula represent a golden opportunity for pursuing their long-standing interest (going back to the Shah and beyond) of dominating the Gulf.

The Iranians are accustomed to being able to use their covert capabilities to shape the political realities in countries. They did this effectively in Iraq and are doing it in Afghanistan. They regarded this as low risk and high reward. The Saudis, recognizing that this posed a fundamental risk to their regime and consulting with the Americans, have led a coalition force into Bahrain to halt the uprising and save the regime. Pressed by covert forces, they were forced into an overt action they were clearly reluctant to take.

We are now off the map, so to speak. The question is how the Iranians respond, and there is every reason to think that they do not know. They probably did not expect a direct military move by the Saudis, given that the Saudis prefer to act more quietly themselves. The Iranians wanted to destabilize without triggering a strong response, but they were sufficiently successful in using local issues that the Saudis felt they had no choice in the matter. It is Iran’s move.

If Iran simply does nothing, then the wave that has been moving in its favor might be stopped and reversed. They could lose a historic opportunity. At the same time, the door remains open in Iraq, and that is the main prize here. They might simply accept the reversal and pursue their main line. But even there things are murky. There are rumors in Washington that U.S. President Barack Obama has decided to slow down, halt or even reverse the withdrawal from Iraq. Rumors are merely rumors, but these make sense. Completing the withdrawal now would tilt the balance in Iraq to Iran, a strategic disaster.

Therefore, the Iranians are facing a counter-offensive that threatens the project they have been pursuing for years just when it appeared to be coming to fruition. Of course, it is just before a project succeeds that opposition mobilizes, so they should not be surprised that resistance has grown so strong. But surprised or not, they now have a strategic decision to make and not very long to make it.

They can up the ante by increasing resistance in Bahrain and forcing fighting on the ground. It is not clear that the Bahraini opposition is prepared to take that risk on behalf of Iran, but it is a potential option. They have the option of trying to increase unrest elsewhere in order to spread the Saudi and Gulf Cooperation Council forces, weakening their impact. It is not clear how much leverage the Iranians have in other countries. The Iranians could try to create problems in Saudi Arabia, but given the Saudis’ actions in Bahrain, this becomes more difficult.

Finally, they can attempt an overt intervention, either in Bahrain or elsewhere, such as Iraq or Afghanistan. A naval movement against Bahrain is not impossible, but if the U.S. Navy intervenes, which it likely would, it would be a disaster for the Iranians. Operations in Iraq or Afghanistan might be more fruitful. It is possible that Shiite insurgents will operate in Iraq, but that would guarantee a halt of the U.S. withdrawal without clearly increasing the Iranians’ advantage there. They want U.S. forces to leave, not give them a reason to stay.

There is then the indirect option, which is to trigger a war with Israel. The killings in the West Bank and Israeli concerns about Hezbollah might be some of Iran’s doing, with the emphasis on “might.” But it is not clear how a Hezbollah confrontation with Israel would help Iran’s position relative to Saudi Arabia in the Persian Gulf. It diverts attention, but the Saudis know the stakes and they will not be easily diverted.

The logic, therefore, is that Iran retreats and waits. But the Saudi move shifts the flow of events, and time is not on Iran’s side.

There is also the domestic Iranian political situation to consider. Iranian President Mahmoud Ahmadinejad has been strong in part because of his successful handling of foreign policy. The massive failure of a destabilization plan would give his political opponents the ammunition needed to weaken him domestically. We do not mean a democratic revolution in Iran, but his

enemies among the clergy who see him as a threat to their position, and hard-liners in the Islamic Revolutionary Guard Corps who want an even more aggressive stand.

Ahmadinejad finds himself in a difficult position. The Saudis have moved decisively. If he does nothing, his position can unravel and with it his domestic political strength. Yet none of the counters he might use seem effective or workable. In the end, his best option is to create a crisis in Iraq, forcing the United States to consider how deeply it wants to be drawn back into Iraq. He might find weakness there that he can translate into some sort of political deal.

At the moment we suspect the Iranians do not know how they will respond. The first issue will have to be determining whether they can create violent resistance to the Saudis in Bahrain, to both tie them down and increase the cost of occupation. It is simply unclear whether the Bahrainis are prepared to pay the price. The opposition does seem to want fundamental change in Bahrain, but it is not clear that they have reached the point where they are prepared to resist and die en masse.

That is undoubtedly what the Iranians are exploring now. If they find that this is not an option, then none of their other options are particularly good. All of them involve risk and difficulty. It also requires that Iran commit itself to confrontations that it has tried to avoid. It prefers covert action that is deniable to overt action that is not.

As we move into the evening, we expect the Iranians are in intense discussions of their next move. Domestic politics are affecting regional strategy, as would be the case in any country. But the clear roadmap the Iranians were working from has now collapsed. The Saudis have called their hand, and they are trying to find out if they have a real or a busted flush. They will have to act quickly before the Saudi action simply becomes a solid reality. But it is not clear what they can do quickly. For the moment, the Saudis have the upper hand. But the Iranians are clever and tenacious. There are no predictions possible. We doubt even the Iranians know what they will do.