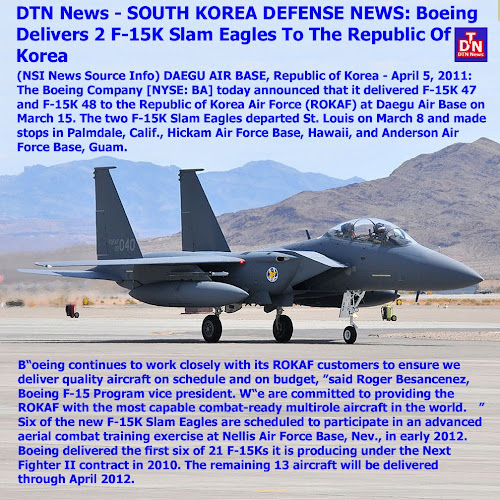 “Boeing continues to work closely with its ROKAF customers to ensure we deliver quality aircraft on schedule and on budget,” said Roger Besancenez, Boeing F-15 Program vice president. “We are committed to providing the ROKAF with the most capable combat-ready multirole aircraft in the world.”

Six of the new F-15K Slam Eagles are scheduled to participate in an advanced aerial combat training exercise at Nellis Air Force Base, Nev., in early 2012.

Boeing delivered the first six of 21 F-15Ks it is producing under the Next Fighter II contract in 2010. The remaining 13 aircraft will be delivered through April 2012.

The F-15K is an advanced variant of the combat-proven F-15E. Equipped with the latest technological upgrades, it is extremely capable, survivable and maintainable. The aircraft’s service life is planned through 2040, with technology insertions and upgrades throughout its life cycle. Boeing completed delivery of 40 Next Fighter I fighter aircraft to the ROKAF in October 2008.