Prime Minister David Cameron held talks in Pakistan on Tuesday, seeking a "fresh start" in relations with Islamabad, nine months after accusing it of turning a blind eye to terrorism. 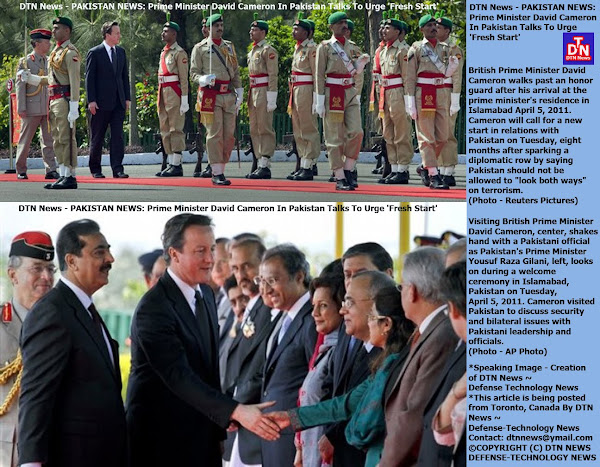 In his first trip to the nuclear-armed Muslim country since taking office in May 2010, Cameron hopes to soothe tensions caused by his remarks during a visit to India, as well as boost cooperation on counter-terrorism and in Afghanistan.

The premier briefly visited Islamabad's Faisal Mosque, nestled under the foothills of the Himalayas, before embarking on a packed day of talks with high-ranking civilian and military officials, as well as opposition leaders.

"Let's today make a fresh start in our relationship. It is time for a new step in relations between Britain and Pakistan and between Britons and Pakistanis," Cameron was to tell an audience of university students.

"Let's make this the start of a new era in the relations between our countries, our governments, our peoples," he was to add, according to pre-released extracts of the speech.

"Let's clear up the misunderstandings of the past, work through the tensions of the present and look together to the opportunities of the future."

During a trade visit to India last July, Cameron caused a diplomatic row by saying Pakistan could not be allowed to "look both ways", promoting the export of terror while publicly working for stability in the region.

President Asif Ali Zardari papered over the row in a visit to London the following month, when he and Cameron said their ties were "unbreakable".

Cameron was to repeat the message Tuesday and discuss with Prime Minister Yousuf Raza Gilani what Pakistan is doing to combat Islamist militants in the tribal belt on the Afghan border, and how they can cooperate more on security.

Officials have attributed the fall to greater action against militants, but also to new threats coming from countries such as Somalia and Yemen.

In an agreement to be signed by the two prime ministers, the countries will agree to set up a centre to share expertise on countering roadside bombs, which pose a major threat to British troops in Afghanistan.

The war in Afghanistan, where Britain has about 9,500 soldiers, will also be discussed with British officials keen to build on what they see as Pakistan's growing involvement in a process of political reconciliation there.

Cameron will also seek closer ties on development, trade and cultural ties, before rounding off his day-long trip with a meeting with Zardari.

"We want a strong relationship with a secure, prosperous, open and flourishing Pakistan," the British premier was to say in his speech.

Cameron will also announce a new investment of up to £650 million over the next four years to get four million Pakistani children into education.