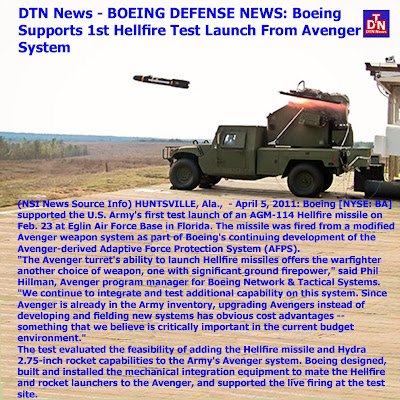 "The Avenger turret's ability to launch Hellfire missiles offers the warfighter another choice of weapon, one with significant ground firepower," said Phil Hillman, Avenger program manager for Boeing Network & Tactical Systems. "We continue to integrate and test additional capability on this system. Since Avenger is already in the Army inventory, upgrading Avengers instead of developing and fielding new systems has obvious cost advantages -- something that we believe is critically important in the current budget environment."

The test evaluated the feasibility of adding the Hellfire missile and Hydra 2.75-inch rocket capabilities to the Army's Avenger system. Boeing designed, built and installed the mechanical integration equipment to mate the Hellfire and rocket launchers to the Avenger, and supported the live firing at the test site.

Avenger was originally designed as an air defense system, but other ground defense capabilities, such as Hellfire, are being considered to expand the system’s range and versatility. The Avenger turret can be mounted on a variety of vehicles, including Mine-Resistant Ambush Protected vehicles, or used as a stand-alone, fixed-mounted weapon station.

Boeing is the largest aerospace company in Alabama and one of the state's largest employers. Current company operations in Huntsville include the Ground-based Midcourse Defense program and other missile defense work, such as the Arrow system and the Patriot Advanced Capability-3 seeker, as well as work associated with Ares I, the International Space Station, Army Integrated Logistics, Brigade Combat Team Modernization and engineering for the 787 and the P-8A Poseidon.