Around 250 young Afghans gathered at Kabul University on Tuesday shouting "death to America" on the fifth day of protests against the burning of a Koran by a fundamentalist U.S. pastor. 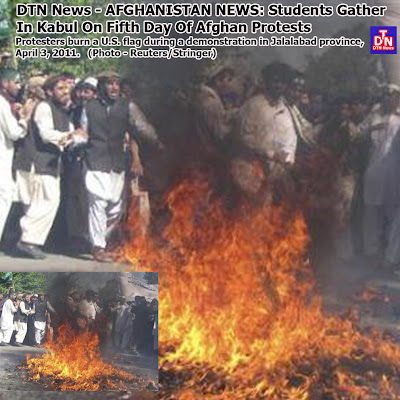 Thousands of people have taken to the streets in protests aroundAfghanistan. There has been deadly violence in two cities, although most protests ended with nothing more dramatic than burning of flags and effigies.

On Friday, seven foreign U.N. staff and five Afghan protesters were killed after demonstrators overran their office in normally peaceful Mazar-i-Sharif city in the north.

The Kabul demonstrators, who included both university students and outsiders, were staying on the university campus, said Hashmat Stanekzai, spokesman for the Kabul police chief.

Across Afghanistan, protesters have denounced fundamentalist Christian preacher Terry Jones, who supervised the burning of a Koran at a church in Florida on March 20. There have been angry sermons by imams urging people to stand up in defense of their religion.

But in eastern Kunar province, a conservative insurgent stronghold which has not seen any protests, senior clerics who form a council known as an ulema, said they were actively working to prevent any gathering because of the violence in other areas.

"The ulema are in discussions to avoid protests against Koran burning because only Afghans face losses of life and damage to their properties, not the one who burned the holy Koran," said Shahzada Shahid, head of the ulema council in Kunar and a member of parliament from the province.

"Terry Jones will be happy seeing Muslims kill Muslims and bloodshed, he won't be hurt," he added.