Source: DTN News - - This article compiled by Roger Smith from reliable sources Asian Defense News
(NSI News Source Info) SINGAPORE - April 6, 2011:
: Prime Minister Lee Hsien Loong's open admission that PAP wards are favoured for HDB upgrading exercises has touched a raw nerve among netizens.
His admission came as a reply to a university student living in the Hougang Single-Member Constituency (SMC) ward who asked if he could pay less tax since the opposition-held ward does not enjoy upgrading programmes. 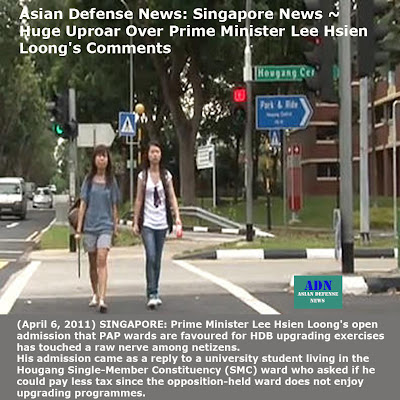 Since this story was first posted, reaction has been swift with over 1,500 Facebook shares and 150 comments. The majority were highly critical of PM Lee's stand.

The highest-rated comment came from Yahoo! userChia, who posted, "Upgrading is not delivered solely based on policies. It is driven by money from the reserves. The money comes from the people and not from PAP."

He added that, "It (upgrading) is a national building programme. A nation does not belong to any party but the people."

Another Yahoo! user, Davido, said, "I can't believe the PM said that, my only respect left for him is that he is candid enough to admit not all wards are treated equally."

User VKH was also appalled at the PM's comments.

He wrote, "I thought that as PM, he was there to represent ALL the people, without favour or preference. He is not the PM of just those he voted for, but for each and every Singapore citizen, including those who did not vote for him or his party... How can the PM say that if you vote for PAP, you get nice chocolate cake and coffee, but if you vote for other party you only get water and biscuit?"

When asked by PM Lee on how he was penalised, the 25-year-old Seah said, "When it comes to upgrading, what is being told to us is that we don't have the funds to actually go ahead with lift upgrading, as well as shelters to the bus stops. When I look across the road to Aljunied GRC, they have everything, " reported The Straits Times.

Paraphrasing the question posed, PM Lee said that what Mr Seah meant is why opposition wards are not treated at least as good, or maybe even better than the PAP wards.

PM Lee's reply was, "The answer is that there has to be a distinction. Because the PAP wards supported the Government and the policies which delivered these good things."

He said that while basic goods such roads, transportation, housing, healthcare and defence apply to Singaporeans, the extras — which come down to the upgrading programmes — is a national programme.

"Between the people who voted and supported the programme and the government, and the people who didn't, I think if we went and put yours before the PAP constituencies, it would be an injustice," PM Lee told the 1,200 students who were attending aMinisterial Forum organised by the National University of Singapore (NUS) Students' Political Association. .

In response to PM Lee, Seah cheekily asked if he could pay less tax and maybe "take one or two years off my NS?", which drew laughter and applause from the audience.

But PM Lee said that this is not possible because the SAF, defence, taxes and all the facilities which have been provided, are enjoyed by every Singaporean.

Rounding off his reply, PM Lee said, "But you can do something about it, you know. You don't have to keep voting for people not in white-on-white."

The contentious issue of ministerial salaries was also discussed at the forum after a Nanyang Technological University (NTU)accountancy student brought it up, comparing the salaries of leaders from Singapore and the United States.

In his response, PM Lee said that US President Barack Obama may be earning less than a Singaporean minister, but the American system is not without its flaws.

For example, he highlighted that the US had different ways of rewarding its presidents and that the low salary of the president had suppressed salaries down the line.

Explaining his first point, PM Lee said that former US presidents are involved in money-spinning book and lecture tours after they step down.

"Retired US presidents go on book tours, they write books, they are paid US$10 million (S$13 million) advance, they get somebody to help them write a tome and they make a lecture tour…Every lecture (by former president) Bill Clinton: US$100,000 to US$200,000 for half an hour.

"That's the system. I think that's not a good system for us. We don't want ministers to retire and go on lecture tours."

Touching on his second point, PM Lee said the low salary of US presidents adversely impacted the rest of the civil service down the line.

"Because the president's pay being set at a level which is not quite right, all the rest of the civil service and government pay in the US system has to take dressing from there and come down…and come down," he said.

PM Lee stressed that Singapore's ministerial pay structure was one that works.

But when asked if salaries should still be pegged to the private sector given the many candidates taken from the civil service and unions, he replied, "The reason I can get good people from the Government and the unions is that I have a pay system which is working properly.

He added, "It is something which is not easy to accept emotionally but is the right thing for Singapore. If you want the system to work for the long term, you must be honest about it. What do I pay for? I pay for the importance of the job and how difficult it is to do."